Take a run through Dishonored’s world with enhanced graphics and all the DLC available before you plunge into 2016’s Dishonored 2. 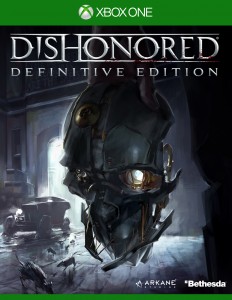 While Dishonored 2 might be the bigger news bit to come out of E3 this year, the newest re-release of the neo-classic first game in the series is nothing to sneeze at. One of the most original FPS titles to see release last-gen, Dishonored still has YouTube gamers wowing audiences with incredible videos of them in action, assassinating targets and teleporting around the game’s steampunk world.

If you haven’t played it or the re-released version that saw launch a few years ago, well, make sure you give this new version a peek. Included in Dishonored: Definitive Edition is a copy of the base game (with enhanced graphics and performance), along with The Knife of Dunwall and the Brigmore Witches expansion packs, both of which add more story content and extend gameplay quite a bit.

Dishonored: Definitive Edition will land on the Xbox One and PS4 (sorry PC gamers, but you’ve already got a pretty good-looking version) this August the 25th in the US and on the 28th in Europe. It’ll cost you $39.99 USD.

Jason's been knee deep in videogames since he was but a lad. Cutting his teeth on the pixely glory that was the Atari 2600, he's been hack'n'slashing and shoot'em'uping ever since. Mainly an FPS and action guy, Jason enjoys the occasional well crafted title from every genre.
@jason_tas
Previous E3 – Sony Reveals Final Fantasy VII Remake
Next E3 2015: Plants vs Zombies: Garden Warfare 2 ups the crazy