One of Marvel’s most impactful crossover events ever, Civil War is set to debut as one of the Warzones of Battleworld. 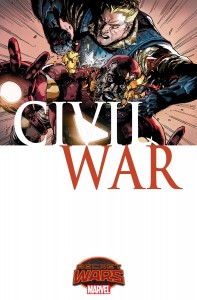 The war never ended. And the deadly conflict escalates to new heights this July! Today, Marvel is pleased to present your new look at CIVIL WAR #1 – from chart-topping creators Charles Soule (Death of Wolverine, Inhuman) and Leinil Yu (Avengers)! Hero fights hero in the Warzone – and a nation stands divided. It has been six years since the fighting began. The forces of the Blue square off against the Iron, all at the command of their leaders – General Steve Rogers and President Tony Stark. When peace has failed, both sides will attempt to end the war once and for all! What is the top-secret Project Bellcurve and does it really hold the key to ending the war in one swift stroke? What damning data could undo President Stark’s administration from within? And worst of all, what unseen enemies seek to exploit the Superhuman Civil War for their own gains? Find out as one of the biggest stories in Marvel history is reborn on Battleworld in CIVIL WAR #1! Whose side are you on?

Not a big fan of Civil War overall (it actually made me shy away from Marvel’s books for a while), but man do I love that cover art. Though this version is a little different than the event book that you may have read, as are all the different zones of the Secret Wars patchwork world.

Seems like the stakes are even bigger than before, and certainly the fact that Cap is a General and isn’t ‘dead’ or arrested, not to mention is outright warring with President (!) Stark is pretty cool too. Sounds like some interesting stuff, and with Soule handling the writing and Leinil Yu doing the artwork, it should be a good one.

Catch Civil War #1 when it hist the stands on the first of July.

Jason's been knee deep in videogames since he was but a lad. Cutting his teeth on the pixely glory that was the Atari 2600, he's been hack'n'slashing and shoot'em'uping ever since. Mainly an FPS and action guy, Jason enjoys the occasional well crafted title from every genre.
@jason_tas
Previous Humble Bundle Launches The Retroism Bundle
Next It’s official- celebrities like playing Batman: Arkham Knight