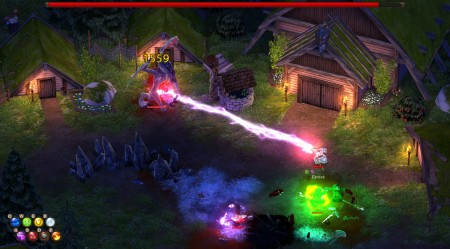 Despite being frustrated by the solo campaign, playing with friends was a blast in Magicka 2.The story is funny and engaging, with great easter eggs hidden throughout and an art style that perfectly matches it. The major issue with Magicaka 2 though, is the difficulty. Rather than being a fun challenge, the laborious gameplay became disheartening. Magicka 2 has great game mechanics and story, but that difficulty level undermines the game’s fun.

Before we delve too deep into this subject, I feel that it is important to note that while you can play this game without a controller on PC, don’t. It was designed to be played with a controller and honestly functions best this way. Save yourself a lot of aggravation and buy a controller.

Magicka 2 is a chaotic, spell-casting blast (pun intended). The number of spells and abilities are numerous and exploring the various combinations is exciting. The developers also greatly improved the spell casting from the first game.

Finally a couch co-op game that has online multiplayer that functions the same way! Drop into a friend’s game or have them join yours with ease! This game is truly designed to be played in multiplayer and it is a lot of fun with friends.

Just be warned, you can kill your fellow magi with your magic, so be careful where you are pointing that death ray.

Magicka 2 actually does have a great story too. Filled with little puns and easter eggs, the writing was as good as the first. But it’s not just the humor, as the actual storyline combines excellently with both mystery and magic.

The cartoonish art direction adds to the game’s humor as well. Often tongue-in-cheek, the art matched the game’s tone perfectly and the bright colors were appealing rather than assaulting. While not breaking artistic ground, the look and style of the game matched the fun ambiance of Magicka.

Magicka 2 is designed to be a crazy, chaotic fun romp in a magical world, and for the most part it is. But this game teases the fine line between challenging and insanely overwhelming.

You have to watch and balance spell casting almost perfectly in order to survive and often even this won’t save you. It is refreshing that this game doesn’t reward button mashing, but the difficulty is scaled a little too high. And while adding players does make the campaign a little easier, the difficulty will scale accordingly. Perhaps Pieces Interactive wanted to encourage cooperative play, but that emphasis just made the solo campaign slightly discouraging. 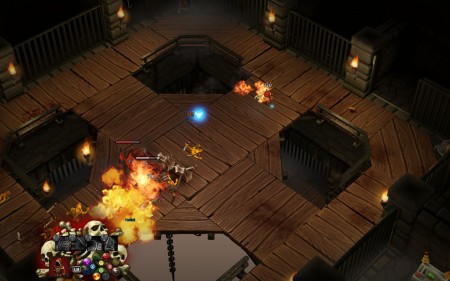 Some people may enjoy the amount of focus and strategy required to play solo, but for everyone else, it’s dangerous to go alone, so take a friend.

To be fair, death is not a huge obstacle. When you die, you just start over at the beginning of the area, which is often close by. The problem is often dying in the same area repeatedly, leading me to feel frustrated rather than motivated.

Chaotic, silly destruction defines Magicka 2 along with insane difficulty. Improved game mechanics and the same spell wielding craziness as the first game help counterbalance the difficulty a bit, motivating me when the challenge didn’t. Co-op did alleviate some of the frustration and playing with my friends, both in person and online, is a great addition. Magicka 2 feels more like a co-op game than a solo one as a result, and should be played as such; nevertheless, the game is funny and engaging.

If you enjoy a challenge and have some friends, definitely check out Magicka 2. It may take some time and effort, but the game is fun. Just try to not to break your controller after dying five times in a row.