The original and some say still the best, The Evil Dead is pretty easily one of the scariest movies to ever grace the silver screen. 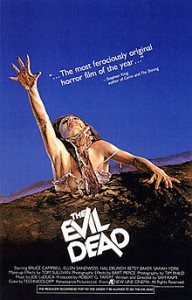 Hello and welcome to the second official Brutal Gamer ‘Halloween in May’ event! This entire month will be dedicated mostly to horror games, and a special weekly series of reviews starring the cult classic movie series: The Evil Dead. So come along for the thrills and chills as we dive head first into Halloween in May *insert thunder and screaming sound effects*

As some of you know, I love horror. I usually love anything in the genre, especially b-movies, and what better way to kick off Halloween in May than with beesiest of b-movies movies (no, I’m not talking about The Bee Movie), The Evil Dead.

With a budget of around three hundred and fifty thousand dollars, Sam Raimi was able to create what would fast become a cult classic, and (in my humble opinion) one of the greatest movies of all time. I love everything about this movie. I love the over the top gore, corny acting, stupid dialogue- let’s face it, if this movie came out today it would be panned, but it didn’t, and it wasn’t.

In case you haven’t watched the original Evil Dead, it differs greatly from the most recent 2013 adaption, both in actual acting quality and seriousness. The first one was an attempt at a gritty horror movie, which failed miserably in what it was trying to be, but succeeded greatly in other ways.

The story revolves around Ash Williams, his sister Cheryl, and their friends. The group heads out into a cabin in the woods (actually the same cabin they used for the 2012 movie Cabin in The Woods). Things happen as things in horror movies tend to do, and they find themselves listening to incantations from Necronomicon (the book of the dead), recorded and left there by the last people to inhabit the cabin.

Ash thinks it’s all fun and games, until later that night when Cheryl goes outside to investigate a tree limb that crashed through her room. If you’ve seen the 2013 remake, you know what happens next; if you haven’t seen the remake, I still can’t tell you because this is technically a family website.

Now that you know the story, which in and of itself still sounds pretty serious, this is where the acting, makeup, and special effects come into play. Bruce Campbell, while a fantastic actor in his own right, was made for cheesy acting, which is to say he was made for this role. Everyone else was pretty good too, I guess. But again, this movie would not be as great as it is today if anyone but the great B.C. played Ash Williams.

I know a lot of my review relies heavily on a “trust me, it’s good.” attitude, but seriously, if you’ve never seen the original, then the less I tell you about it, the better.

I love The Evil Dead, the whole series. Corny acting aside, Sam Raimi really knew what he was doing in creating this. It may not have been the scariest horror movie ever made, but at the time, and even to this day, it’s still entertaining.

To me it’s like Pulp Fiction, you can’t really explain what makes it so good, you just have to hope people trust you and watch it for themselves. So many traits from this movie appear in things still today, like video games and other movies. The Evil Dead is a cheesy, yet masterfully crafted movie that because of its “bad” aging, it will stand the test of time.

While I love the movie though, and really do think it is a pure work of art, I can’t justify giving The Evil Dead any higher rating than what I did. Just because I have a great deal of love for it doesn’t mean I’m going to completely ignore it’s flaws (of which, realistically, there are many).

Five parts actual review, 2 parts sarcasm, 2 parts bad puns, and one part self loathing = one of my game reviews.
Previous Welcome to Halloween in May on BG!
Next Disney Infinity 3.0 is apparently Star Wars themed