More of a puzzle game than the action/platformer that it might appear to be, Kick & Fennick from Jaywalkers Interactive decent fun. 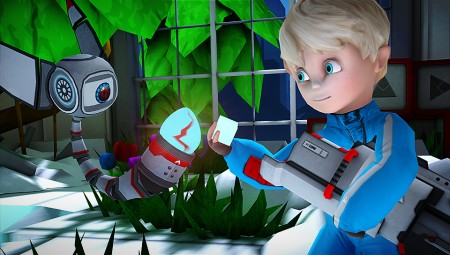 When you first look at Kick & Fennick, it’s pretty easy to imagine that it’s a game in the vein of something like Jak and Daxter. The title stars a duo after all, and one that’s made up of a cartoony young boy brandishing high-powered ordinance and a goofball sidekick. Well, that’s how it looks anyway.

In actuality, K&F (which is what I’ll be calling it for the rest of this review) is a puzzle game with action segments sprinkled throughout. It’s actually pretty fun too, though not a game that’s going to blow you away.

Things start out when a boy named Kick wakes up from his sleep chamber. See, in the world of K&F, things haven’t gone well for humanity. The world is in ruins, and humans exist only locked away in cryo-sleep pods. Robots roam the streets and what’s left of the buildings too, so it’s not all that hospitable for a kid. 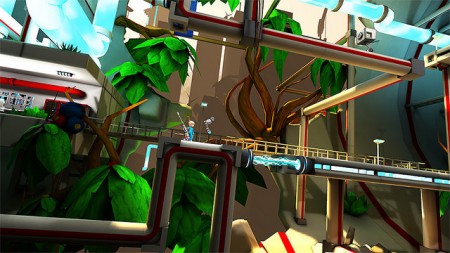 It isn’t long before he stumbles across Fennick, a friendly robot who’s ever-so-slightly broken. The two team up to try and get Fennick a new power core, which is the broken part I just mentioned. …Or something. Here’s the thing, I actually inferred all of what I just wrote out, as there’s no real story at all to K&F. It seems weird since there was obviously some work that went into the creation of the game’s world, but developer Jaywalker Interactive really didn’t do anything with it.

I get that this isn’t the biggest budgeted game in the world, but a little exposition would have been nice. Even a few screens of text or static images of Kick as he and Fennick confer would have been something at least, but… we get nothing, so best not to dwell on that I guess. At least K&F’s world is nice enough looking.

The graphics are, for the most part, bright and colorful in their appearance. There is some variance to this as segments can get a little darker and a bit more foreboding here and there. For the majority of the game though, both indoors and out, the game holds onto a light and cartoonish look, which isn’t a terrible thing.

While Fennick looks pretty cool though, Kick is not all that well put together. You won’t see him up close all that much, but when you do it’s pretty clear that he’s not the most interesting of characters. Kind of a blank slate really. You can change his outfits as you progress, so that’s a little bit of interest there, but none of them really do anything other than changing shades and tones so… 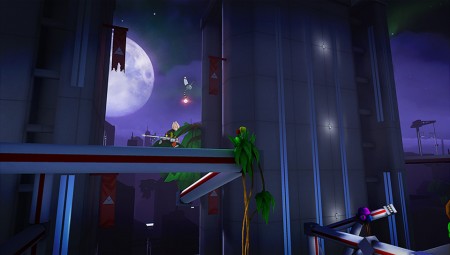 Musically, K&F is only okay. The tunes themselves aren’t bad by any means, but they aren’t the kind of thing that you’re going to hum to yourself after you finish up playing either. And there’s no voice acting. Even though Kick can presumably vocalize as well as any other human, he’s got nothing to say out loud… or, again, in text.

One thing that K&F doe doe well though is play, which is why I saved that for last. The 2D, side-scrolling gameplay present here is interesting and relatively different than any game I’ve played before. Kick has a monster of a gun he totes around (how does he carry that thing?!), but he doesn’t use it for its offensive capabilities. Sure, at times he has to let loose with a few rounds to put down some ‘bots, but he mostly uses it to jump, vault, and otherwise toss himself around Kick & Fennick’s levels.

This is where the puzzle gameplay comes in, and it’s well done for the most part. You can either use the touchscreen or the left analog stick in conjunction with the right trigger to aim and fire the gun. It ends up working much like grenades and the sight indicators that go along with them in FPS games, just in a 2D way. 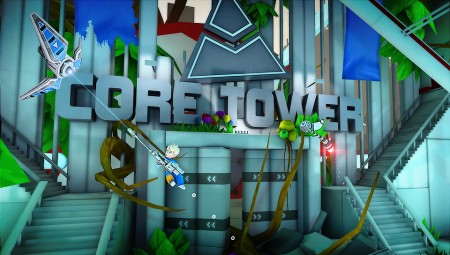 When you fire your gun in a direction, Kick flies to the opposite. This helps with getting him up some of the more vertical levels in the game and even over minor obstacles since he can’t jump at all. The majority of the game tasks you with getting to the level’s exits, and figuring a way to navigate that with just your gun-powered jumps and mid-air re-directioning. Thankfully, you don’t have to have hair-trigger reflexes though as time slows for a few moments when you aim, which is super-helpful as it can be difficult at times to line up a shot or vault. Oh, and just to reiterate again, you do have to shoot some of the robots, and a few of those segments can be very, very cool and satisfying.

At one point, I had launched myself up in the air, then re-directed myself down onto a platform to find a trio of flying bots headed my way. As I landed, I hoisted the rifle and -in slow motion- lined up shot after shot and downed all the flyers. It was pretty neat and I’d actually like to see something like this adapted to a more action-oriented affair in the future.

As for Fennick, he doesn’t do all that much, but he does save you with his tractor beam if you get into trouble. So in that way, Kick can’t actually be killed in the game, which is probably a good thing. He is a little kid after all and that’d be kind of not… good.

I had a good enough time with Kick and Fennick. The puzzle gameplay was interesting and the enemies were fun to dispatch when they showed up. Even though there’s fun to be had here though, there are also a bunch of issues.

For starters, the presentation is seriously lacking with no story, no voice acting, and completely blank characters. If none of that bothers you though, and you’re looking for a simple way to spend a few hours on your Vita, then Kick & Fennick might fit the bill. Oh, and right now it’s free to download if you’re a PS+ subscriber, so you can’t beat the entry price.

Jason's been knee deep in videogames since he was but a lad. Cutting his teeth on the pixely glory that was the Atari 2600, he's been hack'n'slashing and shoot'em'uping ever since. Mainly an FPS and action guy, Jason enjoys the occasional well crafted title from every genre.
@jason_tas
Previous Divinity #1 (comics) Review
Next Dying Light is getting free DLC