Home / Collectables / X-Force, Alien and more arriving in stores this week from DST

X-Force, Alien and more arriving in stores this week from DST

Some awesome Minimates are hitting stores this week with classic X-Force and Alien anniversary sets arriving. 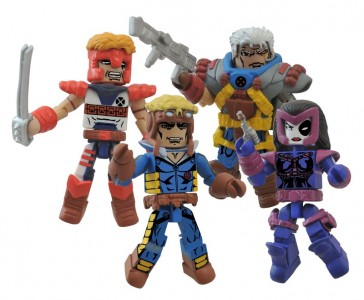 This is a big week for Minimate fans as a pair of sets are hitting stores that you’re not going to want to miss out on.

For starters, the X-Force set is pure, classic Liefeld cool with four members of the original team joining the already available Boom Boom and Richter. Cable (who you can configure in a ton of ways), Domino, Shatterstar, and Cannonball are all included in this one, which would look mighty nifty set up next to that X-Force Omnibus you’ve got on your comics shelf.

Following that up is one of the most highly-awaited sets of Minis hitting in 2015, with the Alien set. This 35th anniversary collection pairs Ripley, Kane, Parker and the original Xenomorph in a four-pack along with a mini-Minimate of Jonesy, Ripley’s cat. Oh, and there’s a freaking facehugger in the box too, so you can recreate Kane’s fateful ‘accident’ in all it’s repulsive glory. And if you’re extra into xeno’s, there’s also an Alien Egg bank hitting this week that’s pretty freaking cool too.

Past that, there’s also a bunch of neat Universal Monsters goodies hitting stores and some Jay and Silent Bob stuff that fans will want to check out. Scroll down and make your plans, all this stuff arrives in stores today.

Jason's been knee deep in videogames since he was but a lad. Cutting his teeth on the pixely glory that was the Atari 2600, he's been hack'n'slashing and shoot'em'uping ever since. Mainly an FPS and action guy, Jason enjoys the occasional well crafted title from every genre.
@jason_tas
Previous New platformer Seasons After Fall is just this side of gorgeous
Next Dying Light novel tie-in on the way from 007 author