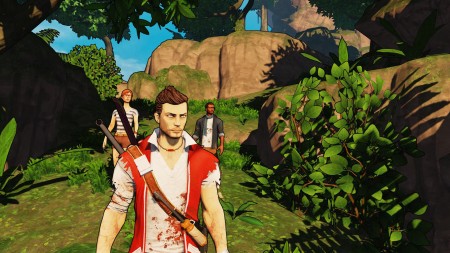 I’ve never much cared for the Dead Island series. In fact, in my mind it’s always been placed in the pulsating mass labeled “Zombie Games”. When the first game was released, a first-person beat’em up of sorts, it was met with a resounding “meh” from plenty of gamers, and yet somehow over time it’s managed to gain a cult following the size of a small army.

The most recent addition to the series, Escape Dead Island is a cell-shaded discovery based survival game, set on the infected Island of Banoi. It’s about as different than the original and the semi-sequel (Riptide) as you can get, which is both good and bad, depending on where you sit on those games.

Escape Dead Island begins in a hospital (or possibly a lab), where you (an unnamed character), are searching for a defector in your vague yet menacing (possibly governmental) agency. As you cut your way (with a super ninja katana) through the infected, which are pretty typical zombies, you eventually find the possible person responsible for the spread of the virus on the island of Banoi. A circumstance, by the way, that’s been shrouded in mystery and shadow since the opening moments of the first DI title- so this in and of itself is kind of a big deal if you’ve been following the story.

Once that sequence ends though, you begin playing as the actual main character in Escape Dead Island, Cliff Calo. Seems Cliffy stole his fathers yacht in order for him and his friends to pursue their “big break in journalism” (Scooby gang anyone? -ed)- ergo, the infection of Banoi (because going to a living-dead infested island is always a good idea). After going ashore and investigating a rather empty seaside bar, the yacht, which floats a few dozen meters off the shore, spontaneously combusts.

This further traps you and your friends on the island and kicking into gear the first psychotic sequence of the game. I’m not going to elaborate on those elements too much here, but they’re pretty neat and really can change up the game, which is otherwise fairly straightforward, a good deal.

Actually, the graphics in both the ‘psycho’ segments and the rest of the adventure are a nice sight in all their cel-shaded glory. Sure, while they look a bit aged and maybe a tad dated (this is a ‘last-gen’ game remember), they’re not really bad at all… just a little three or four years ago in their execution. As long as you’re good with that, then you’ll probably be just fine with EDI’s looks. In truth, there’s not much that I could complain about here. I never noticed any severe clipping issues, or encountered any game-ending glitches (which for some reason slightly disappoints me).

The combat though, that I can pick at a bit- but just a bit. It’s definitely not the most exciting thing in the world and borders on boring at times. The thing to remember here though, is that EDI isn’t Dead Island, and the game is more story based rather than combat based. So I’m honestly fine with how developer Fatshark went about it here. The majority of zombie kills are a result of a successful sneak attack, which if completed correctly are actually extremely satisfying. However, make note that if you move even slightly faster than a snails pace while sneaking up on an infected, they will become aware of your presence. And should that happen, well, it won’t go well as Cliff isn’t immune to the zombie-virus as past DI protagonists have been.

And as I previously mentioned, the psychotic sequences are often eye opening and done really well. The only thing is, they can occasional confuse the heck out of you and throw you off. Though I suppose that’s probably a good thing, as that’s what they’re intended to do.

Cliff and the others are decent enough characters too. They’re at least somewhat more grounded in the situation than previous protagonists, especially since they’re not some kind of zombie-fighting superheroes who are magically immune to the rotting disease that’s infected everyone else. The voice acting isn’t half bad either to be honest, and is pretty enjoyable throughout.

I expected to hate Escape Dead Island, I really did.

In fact, I wanted to hate it, since I really don’t care for the first two games to hold the name. However, I found this one to be rather enjoyable and a fair sight better than those other games in the series. Despite some things you may hear about it, I would suggest that you pick up EDI, or at least rent it, because it’s actually kind of fun… and now, probably a guilty pleasure of mine.

Five parts actual review, 2 parts sarcasm, 2 parts bad puns, and one part self loathing = one of my game reviews.
Previous Imperium turns the tables on Valiant’s heroes in February
Next Dark Horse brings an undead-killing George Washington to comics in The Forge