If you haven’t heard of Mezco’s upcoming One:12 Collective figure of the Dark Knight, then you need to take note as the toy is poised to change the status quo of what makes a premium figure. 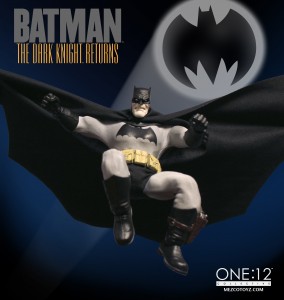 First shown off at this past SDCC in July, the One:12 Collective Batman figure from Mezco Toyz is something to see. Uber detailed and ultra-posable, this figure looks like the spitting image of the design that was seen in The Dark Knight Returns mini-series by Frank Miller back in the ’80s. Crafted in a sort of Mego format, Batman looks better than just about any other action figure in that scale that I’ve seen, and there are a multitude of reasons for that.

For starters, there’s that costume. The familiar bat-suit from The Dark Knight Returns is reproduced in excellent detail here, and with an eye towards actually fitting the figure’s frame and looking like ‘real’ clothing. All too often with something like this, the cloth parts look, well, like they’re on a toy. I find that cloth outfits, almost without exception, tend to be bunchy in the wrong places and ill-fitting in general. At times they can straight-out ruin a figure.

I don’t think I’ve ever owned one that looked perfect. Mego is a classic line, but there’s a lot there that just doesn’t stand up in the modern collector market. I did like the Marvel ‘Mego-esque’ figures that saw release from Toy Biz years ago as well, but even those were flawed in more than a few ways when it came to their uniforms, and the scale of the bodies. 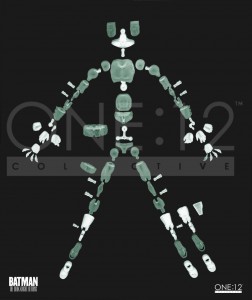 That’s something else that fans needn’t worry about here with the One:12 Collective Batman. The figure itself looks to be well-scaled with none of the freakishly big head/hands/feet issues that have popped up on other lines (including that Toy Biz series). And on top of that, he’s super posable with over 30 points of articulation.

So basically, if there’s a scene in the comic that you wanted to recreate on your shelf or in a diorama, then you can more than likely reproduce that pose with this figure. It’s pretty awesome. In the image to the right, you can actually check out all the work that’s going into this One:12 Collection creation. And if your first thought was something along the lines of ‘that’s a heck of a lot of pieces’, then you’d be right because it definitely is. And for the most part, it’s head and shoulders above what you’re seeing out there on the shelves of mass market and niche retailers alike right now.

If you haven’t put it together yet, I love this line. Yes, line, as in more than one. You may have missed that Judge Dredd has officially been unveiled as the second figure in the series, and should be due sometime in 2015 as well. For now, there’s nothing announced beyond him, but I can’t imagine that Mezco will let this wonderful line go after just two figures.

At least, I hope not, because there are an easy dozen characters I’d like to see featured before that happens. Immediately popping into my head are Superman and Joker (also from The Dark Knight), as well as Hellboy (whom Mezco has a bit of history with) and some of Dark Horse Comics’ new Project Black Sky superheroes like X and Ghost.

Still available in either black and grey or blue and grey color schemes, Batman is still available for pre-order on the toy maker’s website and can be had by clicking here. Shipping starts on the figure on January 12th.

Jason's been knee deep in videogames since he was but a lad. Cutting his teeth on the pixely glory that was the Atari 2600, he's been hack'n'slashing and shoot'em'uping ever since. Mainly an FPS and action guy, Jason enjoys the occasional well crafted title from every genre.
@jason_tas
Previous That Wii U Zelda game? It’s going to be big
Next Transformers Universe officially cancelled by Jagex