In terms of the ORAS demo, let’s get the most important piece out of the way first: yes, there are unlockable goodies, and yes, they’re worth the minimal effort of playing through the demo a few times to experience everything.

Having been the only generation where I haven’t played the core series (my copy of FireRed is staring at me all dejected and sad), I was super excited with the remake announcement for Omega Ruby and Alpha Sapphire. It’s one of those “love it or hate it” entries in the series, and all of my poke-friends either swear it was their favourite or that it was the worst in the series. Naturally, this dichotomous reaction got me interested, especially as I was never an adopter of the GBA and thus never got my chance to play (and totally forgot it existed when I got my DS/3DS).

The demo does a good job of showing off the changes in UI, how the updated graphics of X/Y look with the older game’s locales, and showcasing how the typical series mechanics feel in the remake. The new UI is intriguing; while I’m not sure if it’s a retooling of the original R/S/E UI, it’s enough of a hipper, edgier look over it’s more mundane X/Y counterpart to get my attention. Graphic designers take note: all it took was a few angled lines. I especially love the new Mega Evolution button, and the little animated blasty-blast that pops up when you select it. And man, those new mega activation animations look really cool with the new Mega Bracelet. The environments have updated from 2D to 3D quite well, and the entire game feels new*.

*Yes, I know it’s a demo area, but I’m talking about the buildings and people and so forth adapting well to the new 3D style.

The biggest (and one of only two) hangups with the demo is that the special mega-stone Pokemon, Mega Glalie and Mega Steelix, are region-locked; this means Japanese demo players will get a special Mega Steelix, while the rest of the world gets Mega Glalie. I’m confident in saying I’m not the only one hugely disappointed by this; Steelix is the clear favourite of the two, and I’d much rather have Steelix over Glalie.  That being said, rumours abound as to whether these special Pokemon are being released like the Torchic/Blazikenite given out with X/Y’s launch (alluding to the future availability of the Glalie and Steelix Mega Stones being available in ORAS or in a future game), or whether this is the only way to acquire those stones. Hopefully you can find a Japanese-region player to trade with you if you’re that desperate for an early stone for Steelix. 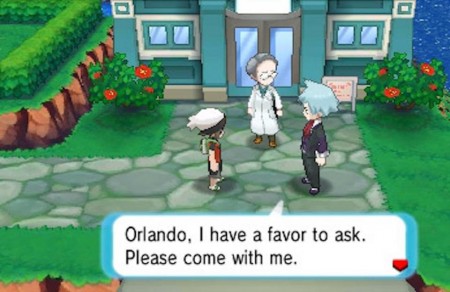 The other hangup with the demo is to be expected: it’s too damn short. While you can repeat the demo up to 10 times for rewards (with rumours abounding about further replays like the days of old when you could claim that Mew could be found by beating the elite four and then surfing where the S.S Anne used to be), I found the lack of transferability of everything but the 3 rewards to be demotivating to further playing.

It’d be nice to keep the pokeballs and healballs you get (which are fairly worthless otherwise, let’s be honest) to catch a few Pokemon from the demo and send them to the main game, but what can you do? Nintendo proved that they could release a great demo with the Smash demo for 3DS, and they didn’t gimp movesets or playability in that. I feel like the demo could have been improved by having a small set of pokemon you could encounter and catch, integration with the pokebank (now there’s a way to get people to fork over that $5!), and more prizes (even if they’re relatively lame like the poke and heal-balls) for further replays.

Overall though, the ORAS demo gives a good sense of how this game will look and feel, while also delivering some fun micro-adventures and prizes. If you’re signed up for the Pokemon trainer newsletter with an account on the Pokemon website, you should have already gotten your code in an email (that’s how I got mine). If not, the release date is November 21st, so it’s not too long to wait.

And if you want to delve into some interesting info about Gen 1 while you wait for ORAS to launch, check out the RBY tiers on Smogon or read the bulbapedia article on it. OU had 16 pokemon with no fire types, and there were a lot of interesting glitches you might not know about (like how Focus Energy in Gen 1 actually lowered your crit rate, and it was also based on the speed stat).

From the frigid wasteland of Canada, Dan has been writing since the early years, when a blank piece of parchment meant a whole world was waiting for him to discover it at the tip of his quill. Then he grew up and realized he could never be like Harry Potter, so he turned to video games instead. He's now a fledgling Game Designer, working hard to make his mark on the industry. In his off-hours, he likes to scorn people who like long walks on the beach. Too much sand.
Previous DC Comics converges its Multiverse in 2015
Next Join The Crew on Xbox One and PS4 this week