Have a look around the Diamond booth at some of the best stuff that’s on the way to Previews magazine, and eventually comic and specialty stores. 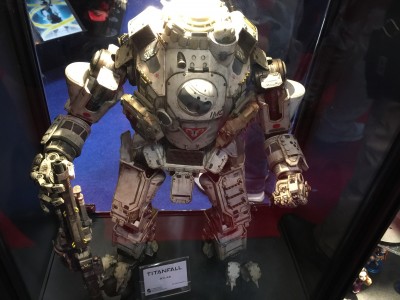 Diamond, other than making some of the coolest stuff around under the DST banner, also publishes the Previews magazines that you’ll usually be able to spot at your local comics shop (or LCS). Previews, if you’re unaware, is a treasure trove of toys, comics, graphic novels, and more that are on pre-offer and are pre-orderable. I used to make it a habit to pick up the massive mag every month when I was a kid and flip through it’s pages with gusto. Some months, it was actually more exciting to read through Previews than to read the week’s books I’d also grabbed at the store. It was that much fun, and that loaded with awesome stuff.

Here in the gallery below, you’ll see a smattering of what’s to come and get a little sense of what the magazine still offers today. We’ve got stuff from Marvel, DC, Transformers, TMNT, and one massive (and I mean massive) Titanfall toy that you’ve got to see to believe. Even if you’re not a fan of the game (I’m not), this thing’s flat-out amazing.

Jason's been knee deep in videogames since he was but a lad. Cutting his teeth on the pixely glory that was the Atari 2600, he's been hack'n'slashing and shoot'em'uping ever since. Mainly an FPS and action guy, Jason enjoys the occasional well crafted title from every genre.
@jason_tas
Previous Surprise! The revamped 3DS is a huge hit in Japan
Next Civ: Beyond Earth Intro Cinematic Premieres on YouTube