One of the best horror series out there sends its hero even further into the dark side in Criminal Macabre: The Third Child. 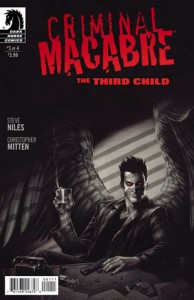 Cal’s changed . . . and maybe not for the better. Locked away and drowning himself with booze and aspirin, Cal feels the evil consuming him. Will he be able to withstand its pull or will he become the monster war’s greatest weapon of destruction?

* Written by Steve Niles (Breath of Bones, 30 Days of Night)

* Directly picks up from Criminal Macabre: The Eyes of Frankenstein!

If you’re a follower of Dark Horse Comics and author Steve Niles’ Criminal Macabre, then I’m going to be preaching to the choir here, but it’s far and away one of the best horror series (of mini-series) out there from any publisher.

Second only to Dark Horse’s Hellboy lineup of books to me, Criminal Macabre caught my interest with the 30 Days of Night (another Niles’ series) crossover event and never let go. Main character Cal McDonald is one of most fun to read anti-heroes in comics and is now going a decidedly darker route as his ‘death’ and subsequent transformation into a ghoul are giving way to something even darker and more evil-tinged.

With a terrific cast of characters (that actually contains Frankenstein’s Monster) and Niles back at the helm once again, Criminal Macabre: The Third Child should be more of the same. Catch it when it hits the racks on September 17th, and catch a special preview of the first issue by clicking on the thumb to the left.

Jason's been knee deep in videogames since he was but a lad. Cutting his teeth on the pixely glory that was the Atari 2600, he's been hack'n'slashing and shoot'em'uping ever since. Mainly an FPS and action guy, Jason enjoys the occasional well crafted title from every genre.
@jason_tas
Previous Destiny launch trailer is all (live) action
Next Legendary Skylanders ready for pre-order at Toys R Us today