Always one to put on a solid showing, Valiant will be rolling into the Baltimore Con with the slate of events you’d expect. 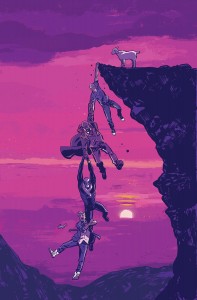 Charm City! Wait a sec, Baltimore is called Charm City? When did that become a thing? …Charm City! Valiant is coming for you with a pretty great list of signing opportunities, giveaways, and exclusive items.

The publisher has a special The Delinquents #1 Baltimore Comic-Con 2014 Exclusive Variant planned for the show, which you can pick up for yourself at they broth on the show floor, and that’s not all. The Valiant: First Look preview will also be available at the booth, and as a nice little bonus, this one is free to grab.

First Look will go behind the scenes at the company for a peek at The Valiant, the mini-series that’s on the way this December from Jeff Lemire, Matt Kindt, and Paolo Rivera. That’s one heck of a lineup if I might add. You’ll get “never-before-seen artwork, preview pages, and interviews”, all inside this preview book. The final mini-series will figure in pretty much every hero in the Valiant U too, so you might want to grab a copy of this giveaway to keep track of what’s going on.

In addition to the exclusive book and the freebie, you’ll also be able to meet and get a signature from some of the company’s best including James Asmus, Laura Martin, Rafer Roberts, Brian Reber, and Vivek J. Tiwary- so bring your autograph book and/or copies of some comics to the booth. Wrapping things up for Valiant in Charm City (I like typing it) will be a panel on Saturday the 6th at 1pm. This showcase will be discussing the future of some of the publisher’s biggest books (X-O Manowar, Unity, Rai, Harbinger, Archer & Armstrong) with Valiant talent James Asmus, Ray Fawkes, Vivek J. Tiwary, Brian Reber, and Laura Martin, as well as company Editor-in-Chief Warren Simons and Chief Creative Officer Dinesh Shamdasani.

Jason's been knee deep in videogames since he was but a lad. Cutting his teeth on the pixely glory that was the Atari 2600, he's been hack'n'slashing and shoot'em'uping ever since. Mainly an FPS and action guy, Jason enjoys the occasional well crafted title from every genre.
@jason_tas
Previous Anderson Cooper questions Black Widow’s ‘Avenger’ status in new comic
Next Bowser Jr., Shulk, Ganondorf and more in Super Smash Bros