An apparent leak of Smash newcomers has surfaced all over the internet as of late. Characters such as Shulk, Bowser Jr., and Ganondorf make an appearance.

As some of you may know, I normally don’t jump to conclusions when an alleged leak spreads across the net; however, it’s very hard to deny the legitimacy of this one. If this is a fake, then it would have to be one of the best out there, because everything appears to be real. From the icons, to the 3DS footage, this video seems like more than just another Project M mod. As expected, Shulk wields the monado in battle, attacking foes with a beam of light extending from the sword. Ganondorf seems to play just as he did before, serving as a slower Captain Falcon clone. 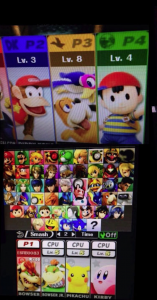 The way Bowser Jr. plays is most intriguing, he fights inside of the Koopa Clown Car. His recovery is pretty cool looking as well, he evacuates the Koopa Clown Car in order to propel himself upwards; after he exits the vehicle, it explodes and another one reappears instantly. Bowser Jr. also utilizes various abilities from New Super Mario Bros, such as the boxing gloves. For anyone who is interested, the Yoshi’s Island stage from Super Smash Brothers Brawl seems to have returned. Another point of interest is the actual roster screenshot itself, which boasts a very large cast of characters.

You can see that Dr. Mario has returned after his long hiatus from Smash, and some returning favorites like Ness and Wario. Though what is arguably the most surprising aspect of this screenshot is the appearance of the dog from Duck Hunt. Legit as the roster may look, it is curious that Mii hasn’t shown up on it, though perhaps there is a good explanation for this that hasn’t surfaced yet. Nintendo has declined to comment on this, only saying they have no announcements to share.

Edit: The previous video was taken down.

Well, my name's Christopher Deleanides as you all know and I'm the Nintendo Editor here at BG. I've been playing video games since 1992, and I've been a Nintendo fan the entirety of those years. My love for video games as well as Nintendo hasn't changed, and probably never will. The only thing that comes close is politics, as I'm very deeply involved in both local and international issues.
Previous Valiant to attend Baltimore Comic Con with signings, exclusives and more
Next Get a good look at Titan Souls in the new gameplay trailer for Acid Nerve’s roguelike