Risen 3: Titan Lords seeks to expand on the established Risen franchise and up the ante for what’s really been a lackluster line of role-playing games. Does it succeed? Well… 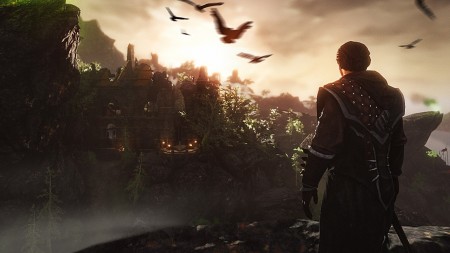 Okay. So. This week my fellow BG Editors and I got to choose between a whole bunch of games for review that came into the office. Sadly, my email didn’t load that day and by the time I was able to check my email again, the only thing left on the spreadsheet was Risen 3. I wasn’t all that bummed out at first though, purely because I’ve wanted to play the Risen series for a long time, I just never got the chance to… and now I kind of wish I hadn’t.

So which part of this less than ideal RPG should we talk about first? Well let’s start with the very first thing you’ll hear. And by that I mean the terrible, and I mean god-awful, voice acting. You know those quirky, and way over-acted English accents they use in the Fable series? Yeah, worse than those. The main character sounds like he’s trying to roleplay as an English Batman. Also, the lips are way out of sync with the voices, often making the game look like a badly English dubbed Japanese movie. Not great, and that was just the first thing I took note of here.

Let me state something before we get any further: I hate early Xbox 360 era graphics. That being said, Risen 3 weirdly looks like an early Xbox 360 game in places, namely in the cutscenes. When in a cutscene, the game just looks flat out bad. However, when out of cutscene, and in the (to be fair) relatively large world that you’re given to play in and explore, the game can look very good, even downright pretty in places. I really don’t get the disassociation between the game engine and the cutscenes, and why they are so mis-matched is something of a mystery to me. As I said though, the world itself is pretty nice looking and I did have a decent amount of fun just romping through the land… until I got ganked by something much stronger than me. Which brings me to my next complaint….

If you take damage, you can drink grog to heal (I mean, I guess it makes sense since this is a pirate game), or you can eat food. However, I didn’t realize that if you eat food, you have to wait ridiculously long times for it to go into effect and actually start healing you. It’s a frustrating addition in what would otherwise be an okay system. I will say that, on the occasions that everything does work, the combat (while somewhat repetitive) can actually be actually quite enjoyable with its mix of gunplay and swords.

Now that the meat and potatoes are out of the way, I’d like to take a moment to mention some of the glitches, and other funny things I came across during my time with Risen 3…

Now, you might notice that up till now I haven’t talked much about the story, and that might feel odd for a review about an RPG. But there’s a good reason for it, and it’s because it honestly felt very generic. There’s nothing that you haven’t played through before in Risen 3. There’s a medieval theme and the hefty pirate elements, that are kind of interesting in the sense that they’re paired together (which is something that you really don’t see too much), but other than that, this is a typical role-player with no outstanding story elements. You’ll be playing through fetch quests, collecting loot and such, and that’s about it.

It’s an RPG with tons to do as well. But while that might sound like a good thing at first, consider that with all the issues that the game has technically and mechanically, it’s an absolute slog to get through most of it and the decent-sized campaign (about 20 hours or so) definitely does drag on.

Risen 3: Titan Lords was surprisingly not the worst game I’ve ever played. That specific title still goes to Ride to Hell: Retribution.

For all of its flaws and its perfect imperfections though, all of me does not dislike all of it (yes, that is a reference to something), and I had some fun playing Risen 3. It wasn’t bad in the sense that it’s so bad it isn’t enjoyable at all, it was bad in the way that it’s fun. I mean, for all its flaws, I feel pretty comfortable in saying that I enjoyed it. I’d buy it at a low price, perhaps like ten dollars. But I definitely wouldn’t pay full retail for it.

I will say this though, as a series that never seemed to really get off the ground, maybe it’s time to let just Risen die (ha! punspunspunspunspuns).