Sounding like a cross between a few genres, Shadow Realms combines fantasy and modern sensibilities for a 4 on 1 gaming experience. 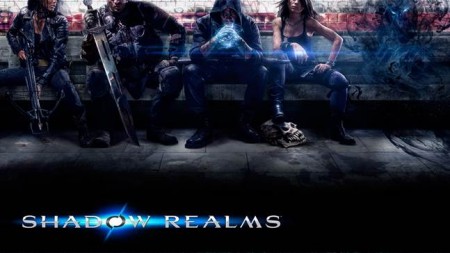 The multiplayer-only, four on one Shadow Realms is BioWare’s newest RPG where you’ll be taking on your buddies in a world that’s as sword & sorcery as it is guns and ammo. In BioWare’s newest universe, magic is coming back to Earth via a war between the evil Shadow Legions of Embra and the heroic members of the Radiant Empires. Basically, all over Earth, people are getting magical abilities awakened in them so they can battle a new weapon rolled out by the Legions, a group called the Shadowlords.

Four players will take on the roles of the heroes in the games missions, while a fifth takes the title of an evil Shadowlord. As you play, you’ll build experience for your character, which’ll be dependent on whether you chose a good or bad role and in how many games you took up that mantle. I did say this was an RPG too, so don’t get confused and start thinking that Shadow Realms is an arena combat title or something. BioWare promises that there definitely is an “overarching narrative” happening here, and it’s one that’s set to be told via periodic updates to the game. The developer is suggesting that this is an RPG that plays out like an episodic TV series, and it sort of sounds like that’s the case.

They’re also looking for Shadow Realms to harken back to the great table top games of yesteryear, many of which are still popular today. That’s no easy task, but if a developer is going to pull it off, it’s probably BioWare.

“This game brings us back to our roots in the realm of classic Pen and Paper RPG, but also delivers something that’s completely new and innovative for our fans,” said Jeff Hickman, General Manager and Vice President at BioWare Austin. “Shadow Realms is a new BioWare RPG that has the hallmarks of all BioWare games with a rich story, a unique world setting and deep combat progression, but built as an interactive experience that evolves the genre and broadens the appeal to online gamers all over the world.”

Shadow Realms is being planned for the PC with no consoles currently announced  as getting the game. There’s no release date as of yet, but you can get the chance to get into the alpha for it by clicking here.

Jason's been knee deep in videogames since he was but a lad. Cutting his teeth on the pixely glory that was the Atari 2600, he's been hack'n'slashing and shoot'em'uping ever since. Mainly an FPS and action guy, Jason enjoys the occasional well crafted title from every genre.
@jason_tas
Previous More nastiness in store for The Evil Within with Season Pass
Next Gamescom 2014: Activision gets small with Skylanders Minis