Daredevil #6 sheds light on the Original Sins of the Murdocks

Matt Murdock’s family has always been something of a mystery. Thanks to Original Sin and the Watcher’s eyes though, the fog is about to be lifted. 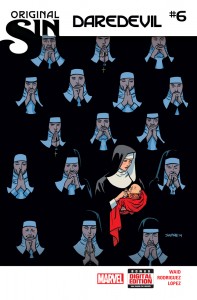 This July, the truth about Matt Murdock’s parents comes to light in DAREDEVIL #6 – an Original Sin Tie-In! After nearly 30 years, the untold story of Matt Murdock’s mother will finally be revealed, courtesy of Eisner award-winning writer Mark Waid and critically acclaimed artist Javier Rodriguez! Raised in a broken home, Matt Murdock made peace with his mother’s absence long ago, even though he never knew why. Now, thanks to the events of Original Sin, the Man Without Fear will be set on a path that will send her crashing back into his life! Only their meeting won’t be exactly as he imagined! What is the dark secret that tore apart the Murdock family? How did Matt’s mother become Sister Maggie? Matt Murdock’s journey to the truth begins as Original Sin opens the Man Without Fear’s eyes this July in DAREDEVIL #6!

The Marvel Universe really has more issues than you can shake a billy club at doesn’t it? Take Matt Murdock for example. Here’s a guy who’s entire life has been shrouded in mystery. He’s never been sure of what happened to break up his home life, or what drove his mom to become a nun.

He’s about to find out though as the cosmic events of Original Sin are about to come crashing down to Earth and affect one of the more ‘grounded’ heroes in the Marvel U. This is one not to miss if you’re a longtime DD fan. The man without fear’s life is about to get turned inside out in Daredevil #6, on the racks this July the 23rd from Mark Waid and Javier Rodriguez.

Jason's been knee deep in videogames since he was but a lad. Cutting his teeth on the pixely glory that was the Atari 2600, he's been hack'n'slashing and shoot'em'uping ever since. Mainly an FPS and action guy, Jason enjoys the occasional well crafted title from every genre.
@jason_tas
Previous Transformers: Rise of the Dark Spark (Xbox One) Review
Next The Hub network celebrates the 4th with a Transformers marathon