Shovel Knight digs its way onto Wii U and 3DS

Yacht Club Games’ platformed about a knight with a penchant for digging arrives on Nintendo’s consoles with Shovel Knight. 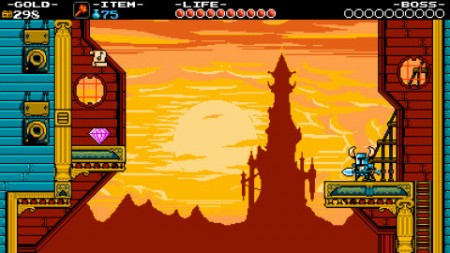 You play as the eponymous Shovel Knight, a small knight with a huge quest. Shovel Knight has come to this land with two goals: to defeat the evil Enchantress and quest for his lost beloved. But between Shovel Knight and his beloved stands a cadre of villainous knights. These terrible foes, known as The Order of No Quarter, have been dispatched to prevent Shovel Knight from reaching the Enchantress, and will pursue their mission at any cost!

If you’ve been paying attention to SK’s development, then you probably already know why the little game has made such an impression- and it hasn’t even hit servers yet. Classic platforming action, combined with retro-style graphics and a gameplay engine that looks like it hits the mark (with a shovel) all make this a title not to be over-looked for those who miss the days of the SNES.

Shovel Knight will be pulling double duty tomorrow, June 26th, when it’s released for both the 3DS and Nintendo Wii U.

Jason's been knee deep in videogames since he was but a lad. Cutting his teeth on the pixely glory that was the Atari 2600, he's been hack'n'slashing and shoot'em'uping ever since. Mainly an FPS and action guy, Jason enjoys the occasional well crafted title from every genre.
@jason_tas
Previous IDW to package together classic Wonder Woman newspaper comics
Next 1849 (PC) Review