Ever since getting the Playstation 4 in November I have been eagerly anticipating this game, now a mere 2 weeks from release date we have a demo, so I’m going to give you a review, and seeing if this can live up to the hype. 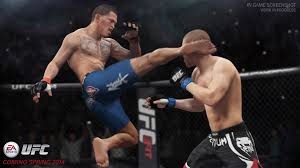 For anyone who is a fan of MMA games, and MMA in general for that matter, will love this game. And whereas it’s only a simple demo, it truly gives a look at what the full game will be. The demo gives you the option to take part in a 3 round fight between Jon Jones and Alexander Gustafsson. Before you dive into the action you are thankfully given an in-depth tutorial for how the mechanics work. The left analogue stick controls your character and the shoulder buttons add depth to the punches, its with the right stick where all the transitions happen and its this stick that will make you win your matches in the Octogan.

The Controls are easy enough, you use the right stick for transitions, and you use the bumpers for alternative punches, and the L2 button is used to initiate take downs. Diving into the match i chose Jon Jones, and within minutes i was getting to grips with the in-depth yet fluid controls, with ease i was able to transition from a less dominant position to a dominating position where i was able to rain down hammer fists on Gustafsson. Within the first round he was already a bleeding mess, which truly looked as realistic as you can get. The second round began a bit shakily for me as i was taken down to the ground and had an armbar slapped on me, it was here i was introduced to the submission system in a match for the first time, this little mechanic has you pressing the right stick in a direction to counteract what the opponent is doing, it took a while to get used to but in hindsight it really is a clever way of implementing the submission system.  To end the round i was able to pummel my opponent with body shots leaving him wide open for a superman punch which connected pictture perfectly, and truly showed of the body deformation which has been talked about in previous interviews, a slow motion replay ensued and i was able to see the pain expressed in Gustafsson’s face as he plummeted to the canvas.

Time for the Brutally Honest Verdict:

If you’re a UFC fan you will love it, the gameplay translates perfectly to the sport, and the fluid controls work perfectly well. If your not a fan it will take some getting used to as there is lots to learn and every aspect of the game is well fleshed out. If you fancy a fighting game give it a try you never know you might enjoy it. Oh and if you pre-order the game you get day one access to the legend Bruce Lee himself.