No, we’re not talking about a haircut, this is a mysterious spirit realm in the new Dragon Age title that’s ever-changing and accessible through dreams. 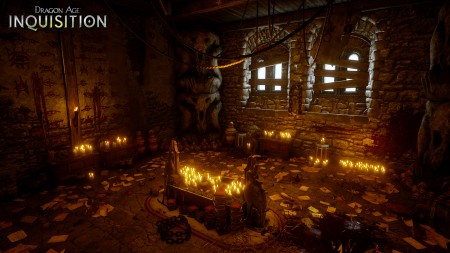 The study of the Fade is as old as humankind. For so long as men have dreamed, we have walked its twisting paths, sometimes catching a glimpse of the city at its heart. Always as close as our own thoughts, but impossibly separated from our world.

Weird stuff and a perfect fit for a high fantasy universe like the one that Dragon Age offers. Basically, the Fade is an etherial dream realm tut’s inhabited by spirits and demons who build actual cities on the astral plane that mimic the ‘real’ cities of Dragon Age’s world. They do it just to “taste life”, which is kind of awesome when you think about it.

With the kind of Mirror Universe that the Fade offers in the game, I wonder if it’ll at all be possible to explore the Fade like you would the rest of the world that BioWare is coming up with for Dragon Age: Inquisition. Most of the game is still something of a mystery, since we haven’t even really gotten all that many screenshots yet, but from what we’ve glimpsed so far, this looks like one not to miss for action/RPG fans.

Dragon Age: Inquisition toasts the Xbox One/360, PS4/3, and PC this October the 7th.

Jason's been knee deep in videogames since he was but a lad. Cutting his teeth on the pixely glory that was the Atari 2600, he's been hack'n'slashing and shoot'em'uping ever since. Mainly an FPS and action guy, Jason enjoys the occasional well crafted title from every genre.
@jason_tas
Previous Batman: Arkham Knight Delayed Until 2015
Next Deadpool vs X-Force #1 blasting onto the racks this July