Things aren’t so rosy amongst the band of heroes assembled to seek out the truth in the great beyond. 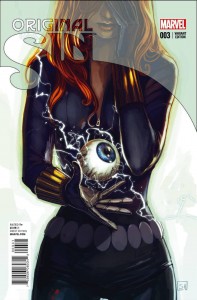 This June – the secrets are out, and no one is safe in ORIGINAL SIN #3, the next chapter in the blockbuster Marvel Universe event critics are already hailing as “extremely strong” and “one hell of a story”! New York Times Bestselling Writer Jason Aaron and blockbuster artist Mike Deodato weave a noir crime murder mystery in the Marvel Universe that will have fans guessing until the very last page!

Following the shocking conclusion of last issue, the hidden secrets of the Avengers, the X-Men, Spider-Man, and the Fantastic Four now stand revealed! As the heroes of the Marvel Universe attempt to recover from the devastating revelations, Nick Fury stands alone against a mysterious foe! Meanwhile, a clue unearthed in deep space takes the Winter Soldier, Moon Knight and Gamora to the doorstep of one of the most bizarre murders of all!

“With the heroes of the Marvel Universe stunned and in disarray following these revelations, it falls to the ragtag band drafted into service by a mysterious string-puller to continue to get to the bottom of what is actually going on behind everything,” says Executive Editor Tom Brevoort. “And then—a devastating betrayal!

No fan can afford to miss the next pulse-pounding chapter of the story that already has the whole comics industry talking when ORIGINAL SIN #3 hits comic shops this June!

Already we’ve had a bunch of huge revelations in Original Sin, so what the third issue of the mega-crossover will bring must be a hum-dinger indeed. Just what it might be that sows the seeds of desertion amongst The Winter Soldier, Moon Knight, and Gamora si up in the air, but with three characters that unbalanced, it could be just about anything.

Find out what’s next for the reeling Marvel U when Original Sin #3 lands on the racks on the 21st of this month from Jason Aaron and Mike Deodato.

Jason's been knee deep in videogames since he was but a lad. Cutting his teeth on the pixely glory that was the Atari 2600, he's been hack'n'slashing and shoot'em'uping ever since. Mainly an FPS and action guy, Jason enjoys the occasional well crafted title from every genre.
@jason_tas
Previous Organic Panic Hits Steam Early Access
Next Pokemon Art Academy paints some pretty pictures on 3DS