Valiant’s conspiracy busting duo take on the ultimate villain- the lure of celebrity. 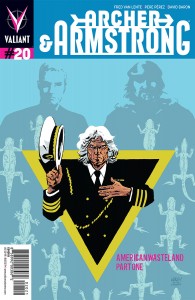 His whole life, Obadiah Archer has been lied to about his true heritage – but when he and his immortal pal Armstrong arrive in L.A. to meet his real parents, they find them in the clutches of the Church of Retrology! What insidious plans does The Lizard King, the head of the favored religion of the Left Coast’s rich and famous, have in store for Valiant’s premier conspiracy busters? And what lurks inside The Lizard King’s mysterious hotel hideaway? Archer & Armstrong are about to take a trip into the darkest reaches of Hollywood history, and they can check-out any time any they like…but they can never leave!

On May 7th, the mojo rises for “AMERICAN WASTELAND” – beginning right here in ARCHER & ARMSTRONG #20!

Creepy Hollywood cults? Yeah, that sounds like it would fall right into A&A’s wheelhouse… not that there’s really anything that doesn’t. Valiant’s pair of crime fighters have carved a swath into the behind-the-scenes bad guys of the Valiant U; basically, the evil-doers who your average joe would never see- the puppet masters.

The Church of Retrology sounds like an interesting new villain for the boys too, and one that’s right in line with their favorite targets. Melding several real world cult-y elements into one basically equals something that they couldn’t avoid for all that long though. I mean, eventually they’re going to run out of the heavy hitters and have to turn their attention to guys like the Lizard King here. And that Archer’s folks are tied up into the whole thing? That just gives ’em more cause for action.

Jason's been knee deep in videogames since he was but a lad. Cutting his teeth on the pixely glory that was the Atari 2600, he's been hack'n'slashing and shoot'em'uping ever since. Mainly an FPS and action guy, Jason enjoys the occasional well crafted title from every genre.
@jason_tas
Previous Anno sets sail for the iPad
Next Deadpool family tragedy revealed in Original Sin tie-in