Elektra might have the strangest named villains of all time, even in this short run of only two issues. 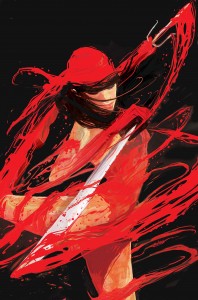 This May, the Marvel Universe’s deadliest assassin braves new dangers in ELEKTRA #2 – from critically acclaimed creators Haden Blackman and Mike Del Mundo! After the shocking events of the first jaw-dropping issue of Elektra, the psychotic killer Bloody Lips is closing in on Marvel’s deadliest femme fatale. If she’s going to survive, she’ll first have to fight her way through the dangerous Monster Island in search of the elusive assassin known only as Cape Crow! What untold terrors lie on Monster Island – and is Elektra’s first mission back set to be her last? Blackman and Del Mundo weave another gorgeous issue about honor and redemption that has to be seen to be believed! Don’t miss the hauntingly beautiful ELEKTRA #2 when it hits comic shops this May!

First we had the assassin Bloody Lips, which was weird enough, and now we get Cape Crow. Seriously, the names of bad guys in Marvel’s new Elektra ongoing are weirder than anything this side of the Metal Gear series. And that’s pretty darn weird.

Good thing the book is so well written then and the artwork is absolutely stunning. Artist Mike Del Mundo has one of the best looking coifs out there on the racks and is a definite drawing card for the formerly Daredevil-exclusive character. His style is like a cross between painted and cartoony and I can’t get enough of it. I was more then a little unfamiliar with Del Mundo before Elektra kicked off, but I’m extremely happy with what I’ve seen from him so far.

As for Haden Blackman’s scripts, they’re actually making the crimson assassin a character that is attractive and interesting, something that I didn’t think was possible with the iffy history that she’s had in books where she takes the limelight. For that alone, he should be commended. And if you haven’t tried Elektra as of yet, you just might be surprised with what you find in its pages.

Elektra #2 skewers the racks on May 21st.

Jason's been knee deep in videogames since he was but a lad. Cutting his teeth on the pixely glory that was the Atari 2600, he's been hack'n'slashing and shoot'em'uping ever since. Mainly an FPS and action guy, Jason enjoys the occasional well crafted title from every genre.
@jason_tas
Previous Injustice: Gods Among Us turns one on mobiles, gets a new mode
Next GameStop to shift away from games, focus on phones and tablets