Learning to Crawl kicks off a brand new look at the origin and first year of Marvel’s Amazing Spider-Man this May. 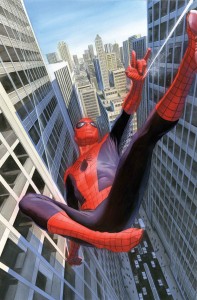 This May, following the debut of the highly anticipated return of Peter Parker in Amazing Spider-Man #1, experience his early days as Spider-Man like you’ve never seen before in Learning to Crawl, a new 5-issue series beginning in AMAZING SPIDER-MAN #1.1! New York Times Bestselling writer Dan Slott (Superior Spider-Man, Silver Surfer) and Eisner Award-Winning Artist RamónPérez (Wolverine and the X-Men, Tale of Sand) craft an all-new spin on the earliest days of the webbed wonder that have bitter consequences to this very day!

From that fateful night he lost his Uncle Ben, a new life began. But there is more to the story of how Peter Parker became the Amazing Spider-Man.

“We all love a good ‘Year One’ story,” says Senior Editor Nick Lowe. “But this is so much MORE! Not only does this address Spider-Man’s past, but it sets up a new villain that will be a huge part of Dan Slott’s AMAZING SPIDER-MAN plans moving forward.”

We all know how Peter Parker learned responsibility, but this series tells the story of how Spider-Man became the super hero we all know and love!  Set within the first 60 days of his webslinging career, Learning to Crawl is an all-new tale set parallel to the character’s first appearance in 1962’s Amazing Fantasy #15 and 1963’s Amazing Spider-Man #1 – #3 that will blaze new trails for upcoming Amazing Spider-Man story arcs in Dan Slott’s new series!

“It’s one thing to know that with great power comes great responsibility, but what do you do with it?” says series writer Dan Slott, in an interview with Marvel.com.

Fans eagerly awaiting Learning to Crawl can get their first taste early with a special 8-page lead-in story from Slott & Pérez in the back of the highly anticipated Amazing Spider-Man #1 later this month!Now is your chance to experience the story you never knew about the story you know by heart! How did Peter Parker rise to the occasion to become the greatest hero the world has ever seen? And who is the mysterious new villain Clash? All will be answered when the excitingAMAZING SPIDER-MAN #1.1 – the first chapter of Learning to Crawl – swings into comic shops this May!

Marvel is pretty quick to say that Learning to Crawl isn’t a ‘Year One’ revamp, but it really kind of is. Not only do we get a look at a modern take on the first few weeks and months of Peter’s web-slinging life, but we also gets  new threat and some familiar characters from Spidey’s now familiar roster of friends and family.

As pointed out in the promotional release above, the storyline is set as a backdrop to the events of Amazing Fantasy #15 (the webbed-wonder’s first appearance) and the original Amazing Spider-Man issues #1-3, if that’s not a Year One retelling, I’m not sure what is. Actually though, I think that’s a fact that makes Learning to Crawl even more interesting.

Sure we’ve had the Ultimate retelling and updating of Spider-Man’s origin, but a proper revamp is more than a long time coming and as a Spidey fan myself, I’m happy to see it. Its scheduling is pretty terrific too with the new feature film hitting early next month and fans just be getting used to having Pete back in the webs again from his time off as a mind-controlled Doc Ock puppet; Peter Parker fandom should be at a high that we haven’t seen in a while.

Amazing Spider-Man #1.1, the first issue of the Learning to Crawl mini-series, will be hitting stands on May 7th from the team of Dan Slott and Ramón Pérez.

Jason's been knee deep in videogames since he was but a lad. Cutting his teeth on the pixely glory that was the Atari 2600, he's been hack'n'slashing and shoot'em'uping ever since. Mainly an FPS and action guy, Jason enjoys the occasional well crafted title from every genre.
@jason_tas
Previous Bungie terminates Halo and Destiny composer Marty O’Donnell
Next Wargame Red Dragon release trailer revealed