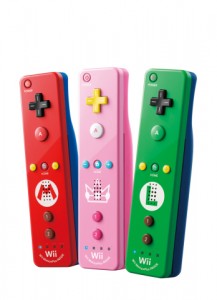 …not to mention pink, as the Princess Peach Wii Remote Plus controller has officially arrived. Fitting right in with the rest of the series that includes Mario and Luigi, the Peach pad actually has quite a bit of thought that went into it. Nintendo says that the blue buttons were meant to represent the Princess’ jewelry while the gold D-pad is her crown. And that royal logo covering the speaker output is a pretty snazzy way to top this redeco off.

You can expect to see the Peach Pink Wii Remote Plus to start warping into stores later this month right along side the Mario and Luigi controllers you see in the promo image. With Wii Remote Plus tech built-right in (no add-on), the Princess’ personal controller will cost you $39.99 USD to take home to your castle, which is a pretty small price for a piece of Mushroom Kingdom royalty.

Jason's been knee deep in videogames since he was but a lad. Cutting his teeth on the pixely glory that was the Atari 2600, he's been hack'n'slashing and shoot'em'uping ever since. Mainly an FPS and action guy, Jason enjoys the occasional well crafted title from every genre.
@jason_tas
Previous Non-Stop stopping on digital and physical formats soon
Next Batman Games Discounted On Xbox Live