Marvel’s  big Original Sin crossover is all about revealing the biggest, life-altering secrets that have never seen the light of day before. In Fantastic Four #6 The Thing learns that he could’ve been normal again, if not for Johnny Storm. 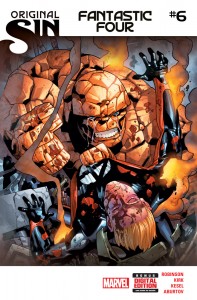 This June, witness another nail in the coffin of the first family, as they are torn further apart in FANTASTIC FOUR #6 – an ORIGINAL SIN tie-in! From Eisner Award-Winning scribe James Robinson and fan-favorite artist Leonard Kirk comes the next blockbuster chapter of the world’s greatest comic magazine that will have you gasping!

They were the best of friends since that fateful trip into the cosmic unknown. The day the Fantastic Four were born, they became a family. Cosmic explorers – forever united. Johnny Storm became the high-flying, hot-headed Human Torch. Ben Grimm, the hideous monster known as The Thing.

Super-Scientist Reed Richards has tried time and again to reverse Grimm’s condition. Each and every time was met with failure. But there was a time when he possessed a device that held the key to permanently curing The Thing – until Johnny inadvertently destroyed it! Reed has kept Johnny’s secret for as long as he could – but now it’s about to get out!

“Something I always loved about the relationship between Ben and Johnny was how much it was like brothers, bickering, poking fun of each other, pranks…great moments that felt like real family,” said editor Mark Paniccia, “The secret that gets out will have a major effect on the two. It’s brilliant emotional stuff. Hard hitting and heart breaking.”

What will Ben do when he discovers that one of his closest friends and steadfast ally condemned him to a life sentence as a monster? It won’t be pretty. The fall of the first family continues as the Original Sin of the Fantastic Four is revealed in FANTASTIC FOUR #6!

Looks like Marvel’s First Family will finally be getting some kind of major shakeup in one form or another. This is the kind of thing that could tear apart a group like the FF; a team that’s way more a family than they are a fighting unit. Now, honestly we all know that the group won’t be fracturing for good, since the band basically just got back together, but there have to be some rifts forming after a bombshell discovery like this. Ben Grimm after all, has only wanted to be a normal man again after the cosmic rays mutated him into the big orange rock monster he’s become.

Finding out that Johnny basically made that an impossibility, well, it’s probably not going to sit all that well. Which is probably an understatement. And lest you think that The Thing is a pushover against whom Storm can weave rings of fire around, he’s gone toe-to-toe with the Hulk on more than one occasion. So you might want to send some good thoughts Torch’s way if you want the matchstick to make it out of this one unscathed.

James Robinson and Leonard Kirk bring this tale of betrayal and cursed luck to the racks this coming June.

Jason's been knee deep in videogames since he was but a lad. Cutting his teeth on the pixely glory that was the Atari 2600, he's been hack'n'slashing and shoot'em'uping ever since. Mainly an FPS and action guy, Jason enjoys the occasional well crafted title from every genre.
@jason_tas
Previous Shadowrun Online out now on the PC
Next Release the Kraken- the new trailer for Call of Duty’s Extinction campaign has arrived