A brand new team of superheroes take up the mantle of the Future Foundation after the battle with Galactus- and they’re joined by a former enemy with extremely questionable motives. 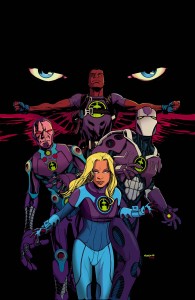 This April, witness the birth of a new team of super geniuses the likes of which the Ultimate Universe has never seen in ULTIMATE FF #1 – a mind-bending new series from blockbuster writer Joshua Hale Fialkov and artist Mario Guevara!

Though they survived the cataclysm, the Earth lay in ruins. And though Galactus and his Gah Lak Tus swarm was defeated – the Ultimate Universe is breaking apart, and fast. The world’s greatest minds – Sue Storm, Tony Stark, Sam Wilson and Machine Man must band together to solve problems too big to tackle alone.

As the new and improved Future Foundation, they are all that stands between us and cosmic level threats that would see the entire universe extinguished.

But world ending threats are not their only problem! And old foe has returned…and he’s joining their team?! Doctor Doom has resurfaced, and he is their only hope to stop the oncoming destruction! But what is Doom’s true agenda? And will the FF uncover it before it’s too late?

Don’t miss the blockbuster first outing of a new team for a new era. The stakes have never been higher this April in ULTIMATE FF #1!

I’m not all that familiar with Marvel’s Ultimate Universe, so a lot of the elements that are presented here are new to me. That Falcon and Sue Storm are two of the brightest minds around being chief among them. That said, the makeup of this team (and the character’s gimmicks of all being mega-brains) is really interesting.

I’ve always thought that the FF was a team without a real cohesive purpose too, other than the fact that the regular old Marvel U version is a ‘family’ of sorts. Making all of them super-geniuses and having them tackle monstrous problems is a grey solution to that. And tossing in Doom, a fan favorite villain, as a fifth wheel? That’s just cool.

Of course, all of these characters are radically different too, so it’ll be something to see just from the standpoint of how they get along and cohabitate as one of the premier teams of heroes in the Ultimate Universe. It should also be pretty cool to see how Sue manages to keep it together without her brother, husband, and good friend as they’re all seemingly gone after the Galactus incident.

That’s a whole ‘nother story too as it looks like Marvel isn’t dropping the ‘universe might be falling apart’ angle.

Either way, Ultimate FF #1 arrives on April 16th from the team of Joshua Hale Fialkov and Mario Guevara- should be an interesting time for Ultimate fans.

Jason's been knee deep in videogames since he was but a lad. Cutting his teeth on the pixely glory that was the Atari 2600, he's been hack'n'slashing and shoot'em'uping ever since. Mainly an FPS and action guy, Jason enjoys the occasional well crafted title from every genre.
@jason_tas
Previous Jack Bauer returns with IDW’s 24: Underground
Next Sega details the making of a xeno in Alien: Isolation