Every Spidey from across the Marvel Multiverse must team to take down the greatest threat to a guy who swings on webs ever- Morlun.

Oh now this is cool. I spotted Spider-Hamm, Ben Reilly, Man-Spider,  and Miguel O’Hara in the shot above- all of which makes me smile as a long-time Spider-fan. There’s so much win in there that I’ll even excuse the zombie Spider-Man that I see in the back… he just had to be in there didn’t he? …not a Marvel Zombies fan, but anyway-

This is going to be a centerpiece tale of the new Spider-Man series and lease on life that Peter Parker has now that the echoes of Doc Ock are finally behind him. In fact, this is such a big Spidey story, that Marvel needed a spreadsheet to keep track of all the Spider-Men in it.

This November, prepare for every Spider-Man…ever! Marvel is proud to announce Spider-Verse, the biggest Spider-Man story of the year from New York Times Best-Selling Spider-Scribe Dan Slott and blockbuster artist Olivier Coipel!

Kicking off this November in Amazing Spider-Man #9 (with a special lead-in story on Free Comic Book Day), Slott and Coipel assemble an legion of Spider-Men from every corner of every universe. Peter Parker, Miguel O’Hara, Miles Morales and many, many more must unite to stop a seemingly insurmountable super-powered foe. Morlun, an incredibly powerful villain has returned with a singular and terrifying goal – exterminate every Spider-Man in every universe! It will take thousands of spider-powered heroes to battle back the greatest threat to this universe or any other!

“The scope of this event is so big, the word ‘epic’ just doesn’t do it justice,” says editor Nick Lowe. “The story is just huge and heartbreaking and has necessitated spreadsheets to organize all the Spider-Men. Luckily we have a writer who has proven time and time again he can thread impossible story-needles [Slott] and the most versatile character artist in the business [Coipel].” 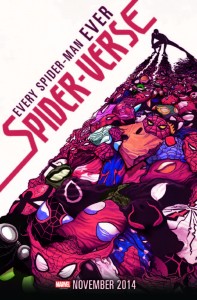 Fans can see the first hints of this event in April’s Amazing Spider-Man #1 but will get their first real taste of Spider-Verse in Marvel’s Free Comic Book Day Guardians of the Galaxy issue this with a special 5-page lead-in story available for free at all participating comic shops on May 3rd. This fall, Spider-Verse unites every Spider-Man in history to drive back the forces of darkness. But will an army of Spiders be enough?

Don’t miss the blockbuster Spider-Man event that will have the Marvel Universe on the edge of its seat when Spider-Verse hits comic shops this November! Plus, don’t miss the start of the next big chapter in Spider-Man history in Amazing Spider-Man #1 on-sale this April!

Spider-Verse is definitely starting the new Amazing Spider-Man monthly off with a bang, and that’s a very good thing lest any fans out there thought that a return to the ‘real’ Pete would mean the character would have it easy for a while. But then, if you are a fan of Spider-Man, then you already know that he never has it easy in pretty much any way, shape, or form.

Catch the first rumblings of what’s to come for the web-head when Amazing Spider-Man #1 lands on the racks next month.

Jason's been knee deep in videogames since he was but a lad. Cutting his teeth on the pixely glory that was the Atari 2600, he's been hack'n'slashing and shoot'em'uping ever since. Mainly an FPS and action guy, Jason enjoys the occasional well crafted title from every genre.
@jason_tas
Previous The Skylanders are going to McDonalds
Next Prepare for conquest- the first Galactic Civilizations III gameplay trailer is here