Quantum and Woody switches up artists, welcomes in Kano 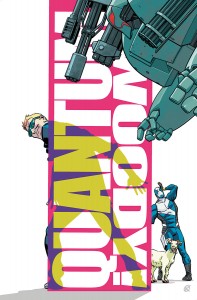 A veteran of both Gotham Central and Swamp Thing over at DC Comics, Kano starts up with Quantum and Woody just as the latest story arc begins with a ‘klang’.

Valiant is proud to announce that fan favorite artist and veteran creator Kano (Swamp Thing, Gotham Central) is joining the world’s worst superhero team for an all-new story arc beginning in Quantum and Woody #9 this April! Written by award-winning writer James Asmus (The End Times of Bram & Ben), jump on board here for a brand new high-stakes adventure pitting Quantum and Woody against the latest scourge of the streets – robots?!

Eric needs to know he can trust Woody – and that means Woody needs to get a job, open a bank account, sign up for a library card, and do all the things a responsible adult does. But when a new gang of rogue mad-scientist super-criminals launch a wave of robo-crime, will Woody stop them…or join them? Plus: the return of Edison Radical Acquisitions, the debauched super-scientists that accidentally gave Quantum and Woody their super-powers. (And that would now like them back, please.)

“In the same way that Tom Fowler and Ming Doyle have both done for the series, Kano is in the perfect wheelhouse to make the reader feel Quantum and Woody’s joy and pain, to tell a clear, vibrant, visual story even as the stuff that happens is madcap, fast-paced, and insane, and to make everything just feel hilarious and exciting,” Quantum and Woody editor Alejandro Arbona told Comic Book Resources.

If you like your superheroics zany and of the slightly madcap tilt, you can’t do much better than Quantum and Woody. The books been gold for just about anyone who reads it and the story lines by James Asmus have been consistently treading that fine line between humor and action so well he could probably pen a Q&W tale in his sleep by now.

The art has been great on the book as well and that’s thanks to a rotation of tremendous talents who’ve hit the book since launch. Kano is just the latest, although no less of a top flight talent than the rest. Catch his work when issue #9 of Quantum and Woody hits the stands this April.

Jason's been knee deep in videogames since he was but a lad. Cutting his teeth on the pixely glory that was the Atari 2600, he's been hack'n'slashing and shoot'em'uping ever since. Mainly an FPS and action guy, Jason enjoys the occasional well crafted title from every genre.
@jason_tas
Previous SimCity Offline Mode Has Been In The Works For A Few Months
Next Lobster Johnson – Get The Lobster #1 (Comics) Preview