Breaking Bad fans have a pair of new bobbleheads to add to their collection with the new Saul Goodman and Jesse bobblers just announced by toy and collectable maker Mezco Toyz. 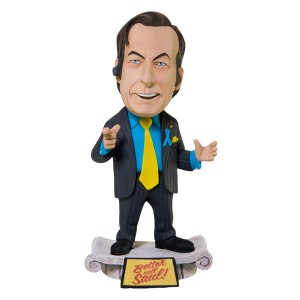 The show might have wrapped (complete with one of the greatest alternate endings to any program ever), but the fun is just getting started thanks to Mezco. Since acquiring the license to the beloved tale of a professor turned meth seller, Mezco has produced a bunch of awesome stuff including some really impressive and well-detailed action figures.

Right in line with those (and the forthcoming Saul Goodman prequel TV show), the company now has two new offerings in the form of the Jesse and ‘Better Call Saul’ bobbleheads. These guys are just screaming out for a DVD shelf or desktop to call home.

This unforgettable figure features the notorious Saul Goodman in his iconic pinstripe suit, forever yelling into his wireless telephone earpiece. Everybody’s favorite sleezeball stands victoriously on a classical plinth reminiscent of the columns in his office.

Relive the tense, edge of your seat excitement as Mezco’s Breaking Bad Saul Goodman Bobblehead stares at you; nodding solemnly as if to say “Better call Saul!”

Saul and base stand 6 inches tall and features bobble action. He comes complete in a collector friendly box. 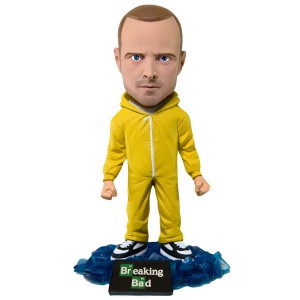 Relive the tense, edge of your seat excitement as Mezco’s Breaking Bad Bobblehead stares at you; nodding solemnly as if to say “Go ahead b***h, make your move!”

Jesse and base stand 6 inches tall and features bobble action. He comes complete in a collector friendly box.

There are no firm release dates as of yet for this double-dose of Breaking Bad awesomeness, but you can expect them some time in July of 2014- just in time for the San Diego Comic Con.

Jason's been knee deep in videogames since he was but a lad. Cutting his teeth on the pixely glory that was the Atari 2600, he's been hack'n'slashing and shoot'em'uping ever since. Mainly an FPS and action guy, Jason enjoys the occasional well crafted title from every genre.
@jason_tas
Previous Free Comic Book Day 2014 gets an Itty Bitty Hellboy and more
Next Indestructible Hulk #18.INH (Comics) Preview