The Force is strong with this collection of Star Wars-themed pinball machines for Pinball FX2! 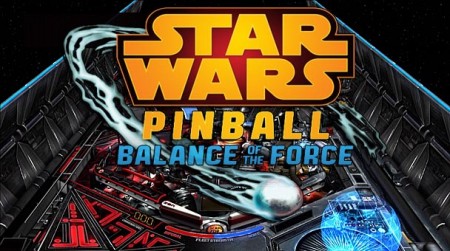 I’ve never been a huge fan of traditional pinball machines. As a child, I typically liked to waste my hard-earned allowance by pumping quarters into the glowing screen of normal standup arcade cabinets than playing games on pinball machines. I think part of me had this notion that pinball machines were more sophisticated, reserved for adults and those who were too good for CRT screen-based arcade machines. I never even really liked video games that emulated pinball machines, as the physics never felt natural, and there was always this gamey-ness to it that never felt right. But I have to admit, I am really impressed with the titles that I’ve played on Pinball FX2. The latest release from the Zen Studios is a collection of Star Wars-themed machines titled Star Wars Pinball: Balance of the Force.

The collection for Star Wars Pinball: Balance of the Force, is the second set of Star Wars tables that has been released for Pinball FX2. While the cost is a bit higher than paying a la carte for single tables (the pack is currently $9.99 via the Xbox Live’s Game Store), you get three amazingly detailed pinball machines: Episode VI: Return of the Jedi, Starfighter Assault, and Darth Vader.

It’s hard for me to determine if a pinball table is good or bad, the same way I can spot cheaply designed video games, but the tables here seems fair. The balls bounced around each Star Wars-themed pinball table, and eventually made it past my flippers. I was able to amass a decent amount of points on each table before it was game over, but I never felt like the game’s virtual physics were cheating me in any way or making the game easier to play.

One of the cool things about the Balance of the Force tables were the little mini-games that were triggered at certain events. Rather than having some sort of animation flash up on the virtual LCD score board, the way sometimes did with traditional tables in arcades, these mini games allowed me to play, for example, a Space Invaders-style game to rack up additional points. At first it was a bit unexpected, as I was scrambling to figure out the controls, while my ships ran helplessly into enemy crafts. Once I lost all of my spacecrafts (X-wings, I think?), it was back to the pinball table. Consecutive playthroughs were better, as I knew the control scheme when those minigames were activated.

Pinball FX2 has a cool way of socially integrating your scores per table with your friends, as well as your overall Pinball FX2 scores. Not only did I find myself wanting to best my friends’ scores on these tables, and working harder to do so, I also felt that twinge to buy more tables so that I could beat them at the other tables!

What I think I liked best about Star Wars Pinball: Balance of the Force was that these pinball machines felt authentic, as if they could exist in an arcade today (if such places still exist!), BUT they embraced their video game-ness and offered things like animations and minigames that would never be possible on a traditional pinball machine.

If you’re not used to playing Pinball FX2 games, you will need to download the standalone Pinball FX2 game, which comes with a free starter table or two, I believe, and then select the game from the list of available machines. I say this because it took me a couple of moments to realize that I needed to redownload the Pinball FX2 application to play these tables — yes, for somebody who has played video games for decades, I’m sometimes slow with these games that serve as hubs for additional content. Just sharing the knowledge. 🙂

Whether you’re a fan of Star Wars or not (and what kind of monster are you if you’re not?!), the Balance of the Force pinball tables for Pinball FX2 are pretty amazing!

The craftsmanship on the tables was faithful to traditional pinball machines, and while I liked the video game elements of turning the LCD scoreboard into a shoot-em-up style mini-game, it didn’t feel TOO video-gamey. I liked the distinct separation between the authentic feeling pinball mechanics and physics while flipping the ball around the table and the evolution of the pinball machine scoreboard. It just felt right.

The set, which comes with three unique tables, will set you back $9.99, but the price is absolutely worth it. The basic Pinball FX2 game/app (which is free) is required to access these tables. (You probably already knew this, but wanted to mention it.)

Troy is the Features Editor at Brutal Gamer. When he's not writing about or playing video games, he's enjoying life with his wife and children. He also loves coffee. And lots of it.
Previous The Legend of Zelda: A Link Between Worlds (3DS) Review
Next Ghosts lead the way in next-gen sales