Home / Collectables / Diamond takes the wraps off of Spring ’14 offerings

Diamond takes the wraps off of Spring ’14 offerings

This stuff is still a ways off, but I defy you to not get excited about that Stay-Puft Marshmallow Man. 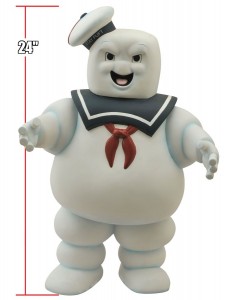 Most of what’s here on the list hasn’t even made it into industry tome Previews as of yet, but your local shop is probably already offering it thanks to Diamond’s heads up. There’s some seriously cool stuff on the way too, so you might want to break out the old wallet, head down to your LCS and get to pre-ordering to secure yours.

From Captain America: The Winter Soldier merch to classically cool stuff like Godzilla and that Stay-Puft dude, there’s something for just about every type of sci-fi and/or superhero fan. Oh, and Cap fans take note- it looks like DST has outed longtime Captain America villain Batroc’s involvement in the film.

Jason's been knee deep in videogames since he was but a lad. Cutting his teeth on the pixely glory that was the Atari 2600, he's been hack'n'slashing and shoot'em'uping ever since. Mainly an FPS and action guy, Jason enjoys the occasional well crafted title from every genre.
@jason_tas
Previous comiXology announces eGift cards, just in time for the Holidays
Next Resogun (PS4) Review