Cap has Nuke in his sights, but is he too late to stop an even greater villain? 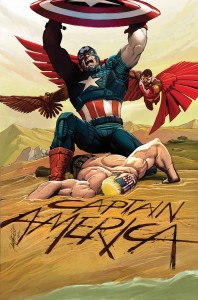 This December, Captain America and the Falcon fight for their lives as Loose Nuke continues in Captain America #14! From the blockbuster creative team of Rick Remender and Carlos Pacheco – Cap finally has his chance to take down Nuke once and for all! But as the deranged super-soldier’s true mission comes into view, will it be too late to stop an even greater threat closing in from the shadows? And how is the disturbing Weapon Minus Program involved? As the sinister Iron Nail’s revenge takes shape, Cap must give it his all to stop him from causing untold destruction…but can he? All leading up to the shocking conclusion that will change the life of Captain America forever, no fan can miss Captain America #14!

Cap can’t seem to catch a break (although the same could be said about the majority of Marvel’s heroes as of late). First he’s trapped in Arnim Zola’s alternate reality (that was freaky), then he’s on the other side of the universe battling the Builders, then he gets back to a world under siege- and now he’s got Nuke, the Iron Nail, some mystery villain and a “shocking conclusion”. It’s enough to make you want to hang up your stars and stripes- fortunately for the Marvel U, that’s just not what Captain America’s about.

See what fresh hell Rick Remender and artist Carlos Pacheco have in store for the super-soldier when Captain America drops onto the racks on December 11th.

Jason's been knee deep in videogames since he was but a lad. Cutting his teeth on the pixely glory that was the Atari 2600, he's been hack'n'slashing and shoot'em'uping ever since. Mainly an FPS and action guy, Jason enjoys the occasional well crafted title from every genre.
@jason_tas
Previous Feature Friday: Hello, PlayStation 4!
Next IDW announces Rogue Trooper creative team