Deep Silver has just announced that Saints Row the Third’s DLC, that later turned into a full-blown game (SRIV) is happening after all. Saints Row IV is about to get even weirder (and probably even more awesome) 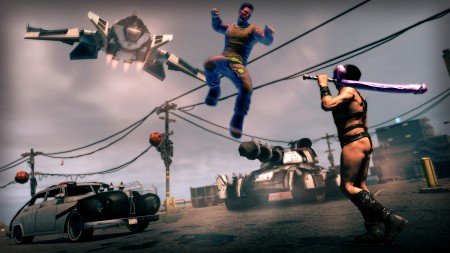 Yes, it’s sort of the same story that Saints Row IV tells already – but it’s radically different in how it tells it.

The canceled Saints Row the Third expansion sees new life as the first DLC mission pack for Saints Row IV. In this alternate take on the Zin invasion storyline, Zinyak and the legions of his alien empire trap the Saints in a virtual world run by a mad AI program known as the Dominatrix. In order to thwart her nefarious schemes and escape to the real world, the Saints will have to counter her army of gimps and sex-workers, shut down her demented simulation, and make unlikely allies along the way. Includes behind-the-scenes commentary and the return of some fan-favorite characters.

Still, EtD should have more than enough ‘new’ content for players to get crazy with since there’s basically a whole new tale being told here. It does share some elements with the main quest from Volition’s open-world masterpiece, but all of the periphery is new and different. It should be very interesting to see just what would have been if Saints Row IV never happened.

Expect some holiday hijinks before the end of the year.

Jason's been knee deep in videogames since he was but a lad. Cutting his teeth on the pixely glory that was the Atari 2600, he's been hack'n'slashing and shoot'em'uping ever since. Mainly an FPS and action guy, Jason enjoys the occasional well crafted title from every genre.
@jason_tas
Previous Fables: The Wolf Among Us available starting tomorrow
Next Wargame Red Dragon screens debut