A real FPS for Sony’s handheld? Really this time? 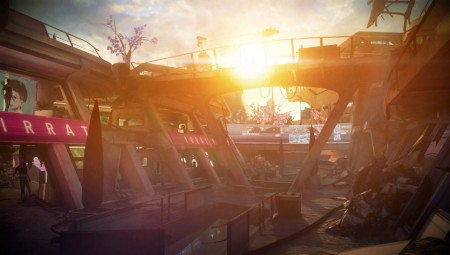 Show of hands, who was massively disappointed by Resistance on the Vita? Call of Duty? The fact that Sony is holding up a translation of BioShock for some reason? The bottom line is that for first-person shooter fans, the PS Vita held ahuge amount of hope for the handheld future of the genre.

Dual thumbsticks and a touchscreen where extra controls could be mapped made the future seem pretty rosy and bright for FPS’ on the console, but it turned out to be anything but. After a short string of high-profile failures, the Vita is looking like every bit the FPS wasteland that the PSP was and that the Nintendo 3DS is. Enter Killzone: Mercenary.

Mercenary is a breath of fresh air for the Vita in a few ways and as an FPS it’s as good as it gets. That does not, however, mean that it’s perfect.

Killzone: Mercenary sets its stage pretty early on and shows just why it’s different than every other game in the franchise. Namely, you play as a merc named Arran Danner in the game. Mercenaries in general have no real solid allegiance to anyone or to any cause other than the almighty dollar, and that’s true on the outer reaches of the Killzone universe as well.

Taking place in the now familiar conflict between the human occupied Alpha Centaurian planets of Vekta and Helghan, Mercenary shows a new side to the conflict with a group of characters that sit in the gray area right in the middle of the conflict. Danner’s boss is clearly all about the money and so are his compatriots.

Interestingly enough, the Helghast and Vektan sides of the war are cast in some very unusual shades for the game as well. There are times within the plot line that the usually villainous Helghast are almost sympathetic and the Vektan armies of the ISA (Interplanetary Strategic Alliance) are not quite what Killzone fans might be used to.

I felt like a lot more could have been done with the morally ambiguous Danner and his relationship to the intersolar war that rages around him throughout the game. Killzone: Mercenary basically sets you on your way at the opening of every mission and the silent protagonist (a pet peeve of mine) Danner just ventures forth and shoots at stuff. A very cool new Killzone character could have been created in Mercenary, but instead we get Mr. Speechless.

Filling in the blanks of the story are the periphery characters and, while the voice actors aren’t terrible by any means, the script does leave a lot to be desired. It’s a strange dichotomy, because the action in Mercenary is definitely adult but the script is almost goofy or cartoonish in parts. This is especially true with the mercenaries surrounding Danner, as they come off as cheap Saturday morning versions of ‘tough guys’.

Killzone: Mercenary is a shooter though, not an RPG, so a faulty script can definitely be overlooked if the action is solid. In this case, it’s excellent. While the shooting and standard first-person conventions that Mercenary sticks to pretty much throughout can’t really be called anything groundbreaking- they are rock-solid and that’s a first for the PS Vita. Yes, after some very high-profile disappointments, the Vita finally has a great and fun FPS.

Thanks to the console’s dual-stick setup, Mercenary plays flawlessly and really shines in parts. Also very well done is the touchscreen integration. It’s not really needed for anything (the triangle button can accomplish most tasks that the screen is set up for), but when it is, it really adds a lot to the gameplay.

When you execute a close-combat move or an assassination for example, you’ll need to swipe across the screen to take care of business. Want to hack a door or a console? Then you’ll need to match up the security keys on screen (sometimes very quickly). The touch controls might not sound like much from this short description, but trust me they’re fun and work well.

Another very impressive part of Mercenary is the look. The graphics are some of the best seen so far on the Vita and are almost on par with the series’ PS3 installments. Scenery changes quite a bit throughout the story and everything is as good looking as a handheld game can look.

From the crumbling architecture of the homes of Helghan’s heads-of-state to the interiors of massive flying bases of operation, Killzone: Mercenary looks great. The designs of some portions of Helghan that we haven’t seen before, like civilian life, are very cool too with a grungy look that’s extremely fitting for the industrial world.

Mercenary also has the biggest weapon loadout of any title in Killzone’s history. The assortment of guns, secondary weapons, explosives and ‘special ability’ gimmicks is truly impressive. You have to buy all of your weaponry (of all kinds) on the black market through a dealer called Blackjack and it’s tons of fun to just flip through what he has in stock and pick out something new to go to war with. Blackjack even offers specials at different times, allowing you to pick up a weapon at a deep discount. Even though Danner gets his cash from his jobs, it’s not all that hard to get some decent dough together. I had no problem affording a little bit of everything as I played. And that’s including those special abilities that you get buy through the VAN-guard system Blackjack offers. You know, stuff like the cloaking device. Did someone say ‘stealth kills’?

So yes, Killzone: Mercenaries does have its problems, but it’s completely worth dealing with them.

The game is just plain fun and a terrific shooter. The fact that it’s on Sony’s beleaguered handheld just makes it all that much better. Mercenaries isn’t built with a ‘mobile’ or ‘portable’ gamer in mind, it’s easy to tell that developer Guerrilla Cambridge just went forward with the idea that they wanted to put together a first-person shooter that just happens to be on the PS Vita- not one that’s defined by being on a handheld console.

Killzone: Mercenaries is probably a ‘must play’ for Killzone fans who’ve been playing the series since it debuted on the PS2 and it’s definitely in the ‘must’ category for those who are Vita owners and love the FPS genre. If any of the above fit your description, then this is one contract that you’ll want to pick up.

Jason's been knee deep in videogames since he was but a lad. Cutting his teeth on the pixely glory that was the Atari 2600, he's been hack'n'slashing and shoot'em'uping ever since. Mainly an FPS and action guy, Jason enjoys the occasional well crafted title from every genre.
@jason_tas
Previous Deals: GOG.com puts RPG classics on sale, offers new freebie
Next Demons of the Past closes out Spellforce 2