Marvel asks- Is He…?

And that’s about all the publisher is giving away today about a “major change” coming to the Marvel U this month. 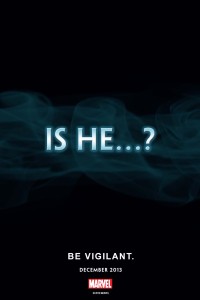 There’s not a whole lot of lead time for this one as Marvel Comics today announced… something… is coming this very month. Apparently, it’s a big ‘something’ too as Marvel is promising that whatever “Is He…?” is will mean a very big change for the Marvel U.

Here’s what was sent out to us (and media outlets in general):

Is He…? The Marvel Universe is on the brink of a major change. Find out more, September 18th!

Now there are a few telling things in there, even though there isn’t much to the message. First of all, it’s a question- an ‘is he or isn’t he’ kind of thing. That could mean loads of stuff as there’s no further exposition. Marvel does say that this is “major” too, so it’s obviously involving a big time character. It’s also something that affects the entire Marvel Universe. Maybe the most interesting thing too (or most completely meaningless thing) is that the ‘he’ is capitalized.  Usually that’s reserved for beings of the divine persuasion…

Overall, that’s a lot more questions than answers, but they do give us some kind of feel for what’s coming. Kind of.

Whatever it may be, it won’t be too long before we all find out if ‘He’ ‘Is’ or not.

Tags Is He...? Marvel Comics

Jason's been knee deep in videogames since he was but a lad. Cutting his teeth on the pixely glory that was the Atari 2600, he's been hack'n'slashing and shoot'em'uping ever since. Mainly an FPS and action guy, Jason enjoys the occasional well crafted title from every genre.
@jason_tas
Previous Total War: Rome 2 (PC) Review
Next Zen’s KickBeat out now in US, coming soon in Europe