Narco Terror is a moderately enjoyable stab at the mayhem of classic 80s action films, but fails to leave a lasting impression. 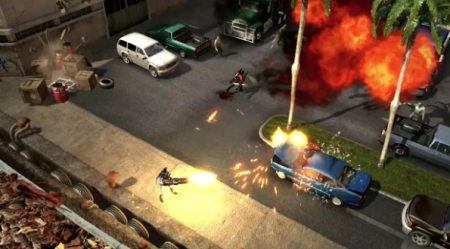 Rubicon Organization’s Narco Terror is a throwback to the 80s – big guns, bad guys, a kidnapping plot and explosions galore. It’s non-stop action, and those looking for a mindless shooter to blast through over an afternoon will probably get a kick out of it. It fails, however, to provide an overly unique experience worth revisiting.

Players control Rick Quinn, an ex-special ops agent whose daughter is kidnapped by his old partner Jay Delgado, now leader of a drug cartel who transports their product via submarine. It’s certainly a plot straight out of a Stallone or Schwarzenegger film, and just as light on the exposition too – although if you’re looking to get straight into the killing, this will be right up your alley. This allows players to progress through the story at a good pace, and there’s very few breaks in the action. Quinn visits multiple locations across the game’s eight missions, taking the fight from the docks of Miami, to South American rivers and underground labs. Level design is mostly linear, pushing players in a straight line from screen to screen, never really allowing for exploration. Later into the game, conflicts take place in narrow corridors, and are considerably less fun than roaming around the somewhat more open jungle areas. 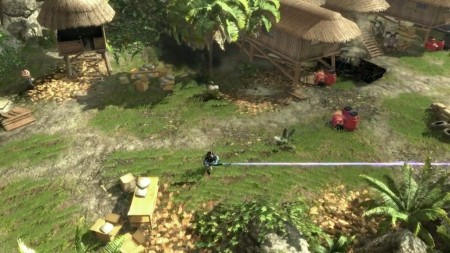 Mechanically, Narco Terror doesn’t play too much different from titles like Renegade Ops or Tomb Raider and the Guardian of Light. There’s four standard weapons to choose from, although players will probably find themselves sticking with one or two favourite guns once upgraded. These weapons can be improved with cash dropped when blowing up vehicles or any of the various red barrels strewn across each level. Grenades are great for clearing out big groups of enemies, alongside special ammo types as well as rare weapon pick-ups like the laser rifle, capable of taking out every enemy on-screen in quick succession. These really liven up the experience, and it’s a shame that players are only given a handful of opportunities to wield them. There’s a decent variety of enemy types you’ll encounter including suicide bombers and tanks, but for a solid chunk of the story it’s mostly waves of generic soldiers with knives or machine guns. This won’t be an issue for those not bothered by repetitive action; but it makes for fairly predictable fights, and will seldom require tactics much more complicated than “run forward and shoot the bad guys”.

This isn’t the only area where the game feels uninspired. While it looks and sounds fine enough for what’s required of it, there’s no distinctive visual style or catchy music to accompany your homicidal rampage. The outdoor environments are fairly pretty, and the explosions are certainly pleasant to look at, but it really could have benefited from a more inspired soundtrack and more technical detail in the visuals. While Rick Quinn definitely racks up the body count, his generic tough-guy attitude doesn’t really make for a notable protagonist. The game doesn’t try too hard to amuse, when it really could have benefited from cheesier one-liners, more ridiculous set-pieces and a truly bad-ass hero. That is, after all, what made 80s action films so memorable. 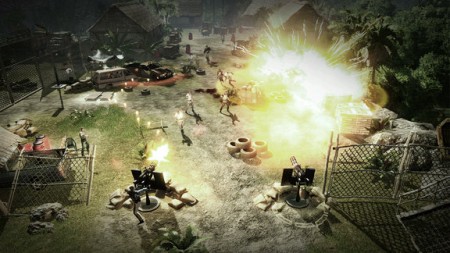 If you’ve got a friend with you, or you manage to find somebody to join up with online (not a single person appeared to be playing online multiplayer during my time with the game), there’s drop-in drop-out co-op which plays exactly like you’d expect – two players sharing the screen, making their way through the story missions. There are leaderboards to climb once you’ve finished the story, and if you didn’t fully upgrade all the weapons, this is a good chance to get that done. Otherwise, there aren’t many reasons to visit the game again once completed.

Narco Terror wasn’t entirely unenjoyable, but it simply doesn’t do much to stand out from the crowd. At $10 it’s a half-decent weekend with buddies, but not likely to inspire much more than the occasional grin.

Legends foretold of a hairy-footed halfling named Kyle, who would go on a perilous quest to drive an ancient evil from the world – instead, he bought a computer and learned how to throw his opinions at the internet. He now resides in New Zealand, where he slowly wears his eyes out on far too many video games.
Previous Mario & Luigi: Dream Team (3DS) Review
Next WildStar goes pay-to-play and play-to-pay