Mario and Luigi‘s latest adventure unfolds on the 3DS in Mario and Luigi Dream Team, only this time, instead of being inside the body of a megalomaniac, they explore Luigi’s dreams. 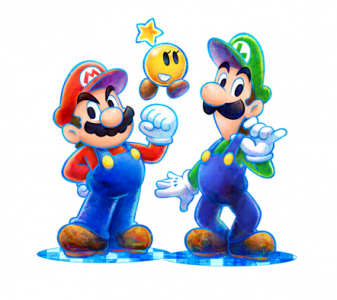 The story of this game is much like any other Mario RPG. Princess Peach has one again been kidnapped, only this time by a sinister creature named Antasma. It’s up to Mario and Luigi to try and rescue her, as they give chase to the villain carrying her through the dream world. It’s pretty derivative, but it gets the job done. It’s explained early on in the game that the way Luigi is portrayed in his dreams, is an ideal version of himself called “Dreamy Luigi”. He has a number of different special abilities, is quite strong, and can even control the very fabric of the dream world itself that Mario traverses. 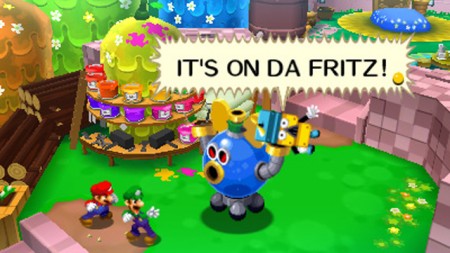 Although the plot can sometimes be enjoyable, it often times missed the mark in its attempts with being corny and funny, with certain NPCs droning on and on about things that neither the bros, or the player quite frankly cares about. Prince Dreambert seemed to be the highlight of the story, with his one liners like “dreamy” every time he witnesses the bros doing something amazing in the dream world, and his polite yet somewhat impatient composure.

Much like its predecessor, Mario and Luigi: Bowser’s Inside Story, this addition to the series is a combination of experimental and traditional gameplay. On the one hand, you have the usual battle mechanics that the two brothers employ, as well as their tag team abilities in the overworld; while on the other hand you have the very bizarre dream world with its own set of nuances. Mario operates much like Bowser did in overworld; he’s by himself, and has a hefty amount of HP, along with a set of attacks unique only to him.

Dreamy Luigi empowers Mario by fusing inside of him, boosting his attack power, health and defense. Every time Mario attacks, a myriad of Luigis, known as “Luiginoids” attack along with him. For example, when Mario jumps, the Luiginoids follow up relentlessly pummeling all of Mario’s foes on screen. Needless to say, the battles with Mario and Luigi fused together are where the game shines. This is where you will be challenged the most, as you won’t have your brother along with you to revive you after fainting. The attacks are also the most interesting, as you form the Luiginoids into a hammer, a stack to crush your enemies, a giant ball, and other types of formations.

Unfortunately, outside of battles, there isn’t much to the dream world. While you will have a plethora of Luigi’s dream abilities to assist you, such as controlling time, changing gravity, changing weather, etc. the novelty tends to wear off rather quickly. Once you’ve overcome about half a dozen of these obstacles with the same one or two abilities in each room, it gets repetitive.

The dream dungeons themselves can sometimes be tedious and long as well, especially Mt. Pajama’s dream version. This is partially due to the fact that the whole world is on a 2 dimensional plane; couple that with the same aesthetics appearing over and over again for hours, it can get a little boring. Fortunately though, this is all broken up often enough by the very wacky and imaginative battles that occur throughout the game. Alpha Dream got very creative with the way they designed enemy attack patterns. If you’re familiar with the Mario and Luigi series, a staple of the battle mechanics is the ability to dodge incoming enemy attacks. In fact, it is necessary that you do this as much as possible, because the damage dealt will often be large enough to defeat the bros.

The attack patterns, especially later on in the game, get very hectic. From your foes circling around you, forcing you to move with them, splitting your bros up and making one watch in horror as they try to survive, to chasing you down a 3 dimensional field, it can get downright insane. The giant battles are sadly not as fun as the regular ones. Even the rather ordinary battles in the real world seemed to surpass these. The touch controls just aren’t as responsive as they should have been. Many times I found that attacks, even when done perfectly, didn’t execute adequately. While it is pretty neat seeing a giant Luigi take the lead with a miniature Mario in tow, the mechanics could have been handled better.

Another issue would be that the game starts off a little too slow in this regard, and too easy. You won’t find yourself very intrigued or seriously challenged until a few hours into the game. I found that while it did get more interesting, there are still quite a few points which made me want to just put the game down, as the boring parts of the dungeons just droned on and on. With that said, those moments that are intriguing, the moments that are filled with insanity and challenge; those are all very much so worth slogging it through some of the drudgery in this game.

Mario and Luigi: Dream Team is a mixed bag of amazing and innovative gameplay, as well as experimental mechanics that didn’t quite turn out as well as they could have been. The battles start off rather slow and easy, but eventually becomes addictive and fun. You find that you’re either really bored, or just having the time of your life. Overall, the experience wasn’t bad, it surpasses Bowser’s Inside Story for sure.

Well, my name's Christopher Deleanides as you all know and I'm the Nintendo Editor here at BG. I've been playing video games since 1992, and I've been a Nintendo fan the entirety of those years. My love for video games as well as Nintendo hasn't changed, and probably never will. The only thing that comes close is politics, as I'm very deeply involved in both local and international issues.
Previous More Monster Hunter 4 footage
Next Narco Terror (PC) Review