Marvel’s weekly Infinite Comics Wolverine series continues as Logan slices his way through the nastiest ninja the Land of the Rising Sun has to offer. 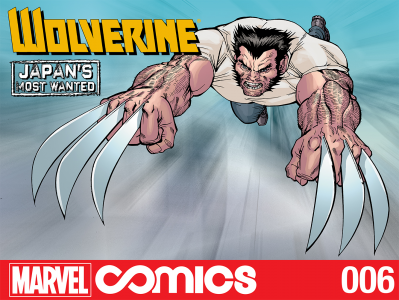 Infinite Comics are tailored to the mobile devices that have become so popular for comics reading in the modern age of the medium. Presented by Jason Aaron, Jason Latour and Paco Diaz; this particular tale has been a rough one for Wolverine.

With Onsen’s horrifying origin revealed, Wolverine’s fight against the Hand takes a personal turn. But the time for vengeance may have to wait, as the Silver Samurai comes crashing for round two!

The Hand are deadly enough as it is, but adding in Silver Samurai makes things all that much tougher for the mutant berzerker.Wolverine: Japan’s Most Wanted is designed for both new and longtime readers of the character. That’s something that’s reinforced by the villain choices as both ninjas and the Samurai are fan fave baddies and immediately recognizable by non-fans since they both feature heavily in The Wolverine, the new X-Men movie currently in theaters.

Jason's been knee deep in videogames since he was but a lad. Cutting his teeth on the pixely glory that was the Atari 2600, he's been hack'n'slashing and shoot'em'uping ever since. Mainly an FPS and action guy, Jason enjoys the occasional well crafted title from every genre.
@jason_tas
Previous Take a detailed look at the Xbox One controller, plus hands on impressions
Next Call of Duty: Ghosts reveals multiplayer this week