Rezzed Hands-On: Revenge Of The Sunfish 2

Probably the closest thing to an acid trip without actually being on acid. 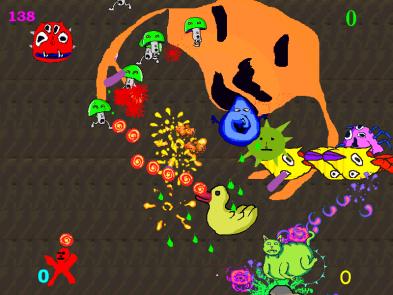 Sometimes you play a game that is quite difficult to put into words and really needs to be played to believed.  Revenge Of The Sunfish 2, developed by Australian developer Jacob Waldemar Buczynski AKA Bizarre Wound, is absolutely one of those games.

ROTSF2 is a sequel to a game released in 2007.  The game starts with you as a zoo cleaner, before a strange creature in one of the zoos bathrooms recruits you to defeat the evil Sunfish, who is able to cross into various different realities.  This is about as much of a story as the demo presents, as you are then thrown into a bizarre series of mini game type levels.

There are all sorts of things you can do as well, from shooting to exploring to platforming and everything in between.  Whether you die or beat each level decides what level you get thrown into next and each level is typically quite short, usually over in a few seconds even if you don’t die.

Each level has a crazy visual style, with bright colours, weird sounds and odd animation effects.  One memorable level in particular sees controlling a rubber legged man in a kitchen, trying to stop his eggs from burning.  But you need to make sure you wash your hands first, because hygiene is important.  You then end up knocking the eggs off the stove and your face melts as a result.  I’m not making that up.

Revenge Of The Sunfish 2 is kind of like The Mighty Boosh meets WarioWare on acid, and even that description doesn’t do it justice.  It’s absurd, insane lunacy and will make you either grin like an idiot or completely freak you out.

The game is still in development, but if you want an idea of what’s in store, you can download the original game for free and get more information from the game’s website.

Mike is Brutal Gamer's Indie Editor. He has been playing video games since the early 90s and is fond of racing games, puzzlers and MMOs. Typing /played while in WoW makes him cry, but not enough to stop him playing some more.
@Ognawk
Previous Rezzed Hands-On: Full Mojo Rampage
Next Games Radar Weekly Roundup: 6/22/2013