Home / Comics / Praise keeps on rolling in for the Black Beetle

Praise keeps on rolling in for the Black Beetle

The book hasn’t even hit stores yet, but Francesco Francavilla’s Black Beetle is already causing quite a stir. The most recent praise comes from the one and only Jim Steranko.

Steranko, an Eisner award winner who’s worked on everything from Marvel and DC’s biggest books to concept art for Raiders of the Lost Ark, applauds the “…classic heroic tradition of the pulps…” and puts The Black Beetle in the same league as noire legends like The Shadow (that’s pretty high praise there) and Spider. 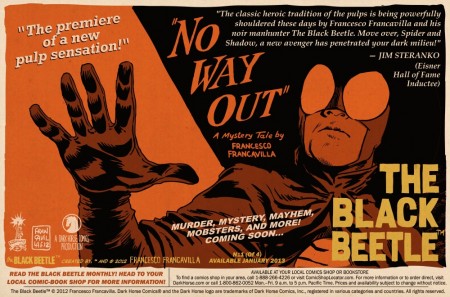 Look for The Black Beetle to stalk the shadows of comic shop shelves this January from Dark Horse Comics.

Jason's been knee deep in videogames since he was but a lad. Cutting his teeth on the pixely glory that was the Atari 2600, he's been hack'n'slashing and shoot'em'uping ever since. Mainly an FPS and action guy, Jason enjoys the occasional well crafted title from every genre.
@jason_tas
Previous Spartacus marches on Rome this January
Next Nascar The Game: Inside Line (Wii) Review