Your gaming rig will look like Mission Control with the S.T.R.I.K.E. 5, because you’ll be controlling your games and apps like you’re in a command center! 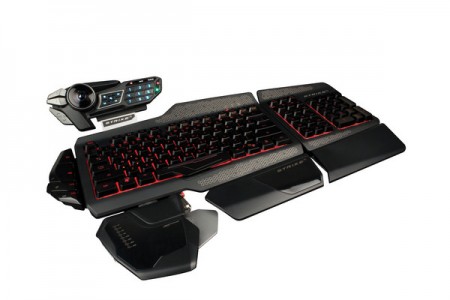 There are many ways to impress your friends with your awesome PC gaming rig. You can get a modified, tower case with a water-cooled processor and flashy lights. You can also have multiple large-screen for multitasking in style. You can even get stylish mice, with programmable buttons for quick-actions and on-the-fly configuration changes. But if you want really impress, you need an awesome keyboard. How about one with nearly 30 programmable buttons, the ability to launch any program with the click of a button, and a kick-ass, completely configurable backlight? Yes! Well then you should check out Mad Catz S.T.R.I.K.E. 5 professional gaming keyboard. It’s pretty rad!

Being an IT guy in real life for a small business, I order computer accessories all the time, especially keyboards. Typically, the keyboards I order come in long, thin boxes. The folks at Mad Catz probably looked at similar-sized boxes and simply laughed, because the box that the S.T.R.I.K.E. 5 keyboard comes in is massive.

The S.T.R.I.K.E. 5 is a modular keyboard designed for serious and professional gamers. The reason the box is so grandiose is because the keyboard has been packaged in several layers, each one consisting of unique keyboard parts. While you can assemble the keyboard in the traditional sense, it can be configured in multiple ways.

Because of the modular design of the S.T.R.I.K.E. 5, there is some assembly required. This isn’t a simple snap-lock modular design, either, although along the keyboard’s wrist guard there are some “snapable” attachments The keyboard comes with several small screws and a small hex tool with which is used to lock the modules together.

As you can imagine, one of the downsides to the S.T.R.I.K.E. 5 keyboard is that if you misplace the screws and hex tool, you will have a very difficult time assembling or disassembling it. It’s not a total loss, though, as the keyboard can still be pieced together without the screws, but it won’t be held as securely. If you don’t expect to be on the go a lot, or won’t be changing your modular configuration very often, this might not be a huge deal. I just advise you to put extra and unused screwed somewhere that you won’t easily forget.

The first time I assembled the keyboard, it took somewhere between 5-10 minutes to identify all of the parts, follow the guide, and screw and lock them all together. After using the keyboard and learning about the various configurations, it can easily be disassembled and reassembled in a variety of configurations within minutes.

While the S.T.R.I.K.E. 5 is a really awesome transformable keyboard, that’s not the coolest part.

To begin, they keyboard comes with a multitude of configurable buttons. Some of them line the left side of the keyboard. You also have additional control keys around the arrow keys on the number pad portion. If that’s not enough, you also have a wrist guard with a horizontal scroll wheel (think of a mouse’s scroll wheel), and a button. It almost feels like the kind of control you might have in the cockpit of an F-16. These wrist guard controls can be mapped to the mouse interface equivalent, or you configure them in your own way.

Atop the keyboard sits the E.Y.E. module, like a little Eye of Sauron. The E.Y.E. acts as something of the hub for the entire device. Not only do you find even more configurable buttons, but the E.Y.E. itself is an OLED screen where you can program many Windows game and application shortcuts. These program shortcuts can be launched with a twist of the dial and a button press.

The E.Y.E. module also can connect to your audio inputs and outputs (microphone and speakers/headset), to give you control over them, as well as other media options. The E.Y.E. also includes controls to set the keyboard backlight to one of three preset colors. The keyboard comes with three default colors, but using the software, you can configure the backlight colors to just about any choice in the color spectrum.

Mapping shortcuts to the keyboard’s buttons isn’t limited to a “one-to-one” commands. For example, while it might be nice to have another shortcut to a much-used function key, on the right side of the keyboard (like the Q key), you can also set up macros, using multiple key commands. These macros can then be mapped to a single key, to quickly perform a series of actions with one key press.

The software also allows for multiple profiles, which you switch through by finding the software icon in the Windows taskbar, and selecting any of your saved profiles. This allows you to switch from game to game very quickly.

If you picked up Windows 8 on this past Friday, the S.T.R.I.K.E. 5 keyboard is 100% compatible with the new operating system. Both the keyboard driver and the software, which is necessary for the programming of the keyboard, were easy to download and install.

One thing to keep in mind with the S.T.R.I.K.E. 5 keyboard and Windows 8 is there is an button to turn off the Windows Key. Because this OS relies on this key more than any previous version of Windows, if you’re having trouble getting back to the new Start menu, you might want to make sure the key hadn’t be disabled.

If you’re the type of gamer who enjoys having complete control over the way you play games, you’ll certainly want to check out S.T.R.I.K.E. 5.

The S.T.R.I.K.E. 5 is a modular keyboard designed for the serious, competitive gamer. While it requires assembly, it’s easy to do so and can be done in many different configurations. Anybody who fiddles around with PC upgrades, like adding new RAM, hard drives, or video cards, or has a knack for assembling anything, from computers to IKEA furniture, will find this to be a breeze.

Using keyboard software, you can program new shortcuts or macro commands to any of the keyboard’s 20+ command keys and buttons. The OLED E.Y.E. module allows for quick access to media controls, presets to change the color of the keyboard’s backlight, and can launch any configured program (and display it’s icon in the eye).

There is little that this keyboard can’t do, or can’t be configured to do. If you’re serious about your PC gaming, or play on a competitive level, this keyboard offers a lot of configurations to give you the edge. Check it out!

Troy is the Features Editor at Brutal Gamer. When he's not writing about or playing video games, he's enjoying life with his wife and children. He also loves coffee. And lots of it.
Previous Cliffy B wants to ‘fix’ Resident Evil
Next Assassin’s Creed III Gets “Highly Recommended” Day One Patch