Black Ops 2 on Vita to have limited single-player mode

Remember when FPS fans were all excited about the PS Vita edition of Call of Duty: Black Ops 2? Well… 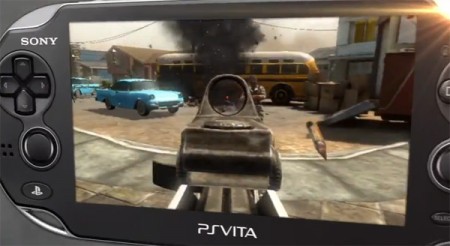 The good news (lets start with that) is that if you’re a multiplayer fan above all else, then you’re in luck. Now the bad news- how do you feel about the single player “action movie” campaigns in the CoD series? Yeah… that you’re kinda out of luck on.

Nihilistic Software’s (they’re handling the portable BlOps2, otherwise known as Call of Duty: Black Ops 2- Declassified) CEO Rob Huebner told MCV today that the game will have a story mode, but not one that will be overly involved or otherwise on the same level as the home console versions of Black Ops 2.

It will reportedly fill in some of the blanks on Black Ops headliners Woods and Mason’s lives but wont be too deep or presumably take all that long to play through. There will also be some additional game modes to spice things up (like Time Trials) that will strive to deliver “the core Call of Duty experience in a mobile package.” Hmmm… Arcade-y is generally the exact opposite of how I want my Call of Duty. There’s a big difference between ‘action movie’ and ‘arcade style’.

In any event, we’ll find out just how convincing one of the preeminent console FPS’ of this generation can be on Sony’s handheld when the game drops right alongside it’s console bros this November the 13th.

Jason's been knee deep in videogames since he was but a lad. Cutting his teeth on the pixely glory that was the Atari 2600, he's been hack'n'slashing and shoot'em'uping ever since. Mainly an FPS and action guy, Jason enjoys the occasional well crafted title from every genre.
@jason_tas
Previous Playing a leaked copy of Halo 4? Say ‘hi’ to the banhammer for us
Next Silent Hill opens the Book of Memories