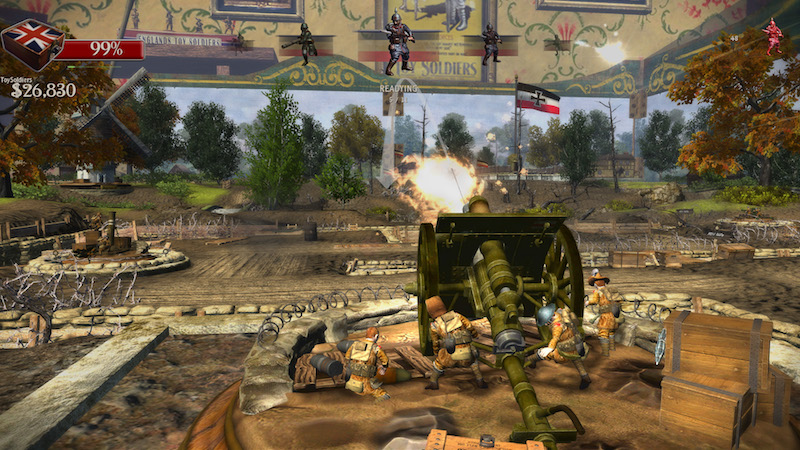 Home / News / Trailer: Toy Soldiers HD out now for all platforms except Switch

The modern classic Toy Soldiers is finally back in action, and in ‘HD’ form thanks to Accelerate Games. Expect new content, better looks, and more.

Back to the toy box

Toy Soldiers HD is a diorama of military action set in a child’s bedroom, a library, lounge, and more. At your command are toy army soldiers, tanks, biplanes, bombers, machine guns, mortars, fixed upgradeable emplacements to defend your base from waves of increasingly challenging attacks. These ingredients make Toy Soldiers HD a lot of fun to play.

Like many strategy games, you carefully build your defenses and plot your offensive moves, but one of the things that makes Toy Soldiers HD unique is the ability to instantly pop in and out of the battlefield from both third-person top-down strategic perspective and first-person POV shooter perspective in both single and multiplayer. Watch the battle play out as you build, upgrade, and repair your defenses or jump feet first into it and wage war against your opponent. Don’t worry, when you go full first-person POV, AI takes over your units.

Toy Soldiers HD is out now for Xbox and PlayStation platforms, as well as the PC. You will not find it on the Switch though, at least not yet.

Accelerate has delayed that til a future date explaining that they are a small team, and pushed hard to just the get the other versions out. Expect it at some point down the line.

Jason's been knee deep in videogames since he was but a lad. Cutting his teeth on the pixely glory that was the Atari 2600, he's been hack'n'slashing and shoot'em'uping ever since. Mainly an FPS and action guy, Jason enjoys the occasional well crafted title from every genre.
@jason_tas
Previous McFarlane’s Dark Knight Returns wave is up for pre-order
Next PCS’ TMNT animated Rocksteady statue up for pre-order