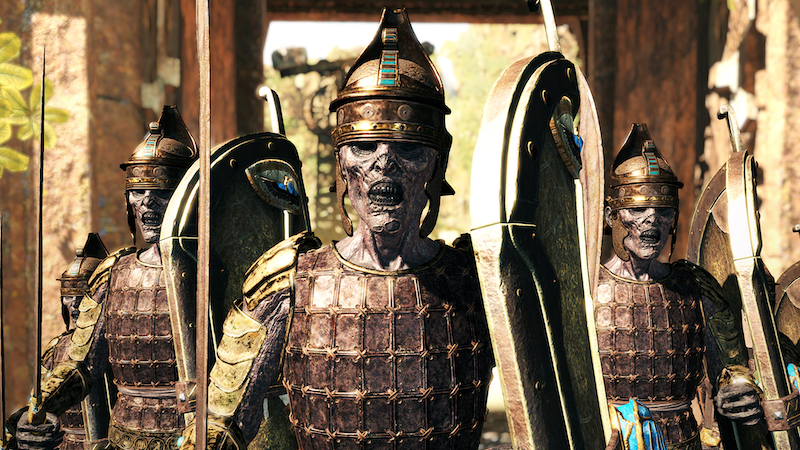 A forgotten title? Maybe so, but last-generation’s horror-themed team/solo shooter Strange Brigade is back, and this time it’s stirring up terror on the Switch.

That is kinda strange

The year was 2018, and Rebellion’s Strange Brigade arrived for consoles and the PC. It brought with it an adventure that was a kinda/sorta mix of Indiana Jones and (the 90s version of) The Mummy. At least, that’s the way it seemed to someone who never actually played it.

Not that I didn’t want to, mind you, because I definitely did. At launch, I had the idea that it was a multiplayer-only title though, and those are just not for me. As it turned out, I wasn’t exactly on the money with that. Yes, Strange Brigade is capable of 2-4 player multi co-op, but you can play solo too, and pretty darn well. But even so, as time drifted ever-onward, Strange Brigade slipped further and further away for me.

From Rebellion, the game wasn’t a blockbuster, and it didn’t have the legs of a Sniper Elite or Zombie Army. Those series’ are still absolutely rolling, with a constant flow of new editions and ports. Though now that I think about it, maybe Strange Brigade is heading for a similar -if slightly delayed- fate.

The game has just been ported to the Nintendo Switch as of last month after all, years after its original launch. That’s got to say something, so perhaps the publisher has other plans for the Brigade. And as a result of actually playing the game for this review, I hope they do.

I wasn’t kidding when I said this game was a mix of Indiana Jones and The Mummy. Basically, you could take almost equal parts of both franchises, shake ’em vigorously, and you’d end up with something very close to Strange Brigade. Maybe toss in a little steampunkery for good measure. Either way, all of it is fun as all get out.

The Strange Brigade is a kind of early-20th century super-team that investigates the occult, the monstrous, and all things that go ‘bump’, more or less. Operating out of a dirigible, the Brigade launches targeted strikes against these terrors, taking them down before they can threaten the globe.

Wielding all manner of weaponry, and with a small core team, the group is no army. But they are nevertheless able to take on even the most powerful of foes. That’s the setup for Strange Brigade’s universe, and when the game kicks off we find them facing down a reanimated foe called Seteki the Witch Queen.

An ancient Egyptian sorceress, Seteki recalls The Mummy’s antagonist Imhotep. She’s out to put the hurt on the modern world, and will reanimate the corpses of thousands of the long-dead to do it. That’s not all though, as she has a cadre of beasts as well, all of which the Brigade will have to fight through.

While I’ve already admitted I’ve never played SB before, I also should tell you I’ve not played really any of Rebellion’s more recent, action-oriented third-person shooters. And yes, that includes the aforementioned (and popular) Sniper Elite, etc.

From what I’ve seen of them though, the action is similar here to something like Zombie Army. And honestly, that feeling makes me want to get into those games, since Strange Brigade’s gameplay is excellent. Not that it’s what I’d label as anything innovative, but it’s spot-on stuff and plays exactly how you’d hope it did.

The main draw in terms of that is most definitely the gunplay. As mentioned, SB features a nice arsenal of hardware, from machine guns to rifles and everything in between. I found the Switch’s joy-cons to perform really well here too, though of course the Pro Controller is preferable. But if you’re in a pinch, or playing on the Switch Lite, the ‘cons should be just fine for you.

Aside from the guns, there are also area-effect weapons like grenades, and special weapons for each character. There are 4 stock agents at the top of the game (more can be added via DLC), and each one has specialties.

In all, there’s the demon-hunter Nalangu, the explosive expert Gracie, the magic-wielding Professor Quincey, and hardened soldier Frank. Just to give you an example, Frank is a life-long soldier, and is both tougher than all the other agents and has an easier time of landing headshots on his prey.

One more note too as to the gameplay, is that environmental hazards play a surprisingly big part in the campaign. Well, they can at least, since they’re not really necessary to use. They’re all over the place though, and can slaughter legions of the dead (or you) instantly. It’s kind of a cool little extra in the game’s play, and adds in a decent amount of strategy.

Yes, this is a last-gen title, and yes it’s a Switch port, but even so Strange Brigade looks good. Especially in handheld mode, the game’s lush, natural locales look sharp. And not that they look bad on bigger TV screens, as the slightly-aged graphical engine is perfectly serviceable, but as a handheld game SB is flat-out terrific. Everything from the plentiful flora to the crumbling temples and ancient mausoleums you’ll often find yourself in looks great.

The title’s levels actually feel alive, as they’re often overgrown with plant life that’s long-since moved in when native populations died out. It’s actually an interesting contrast against the game’s foes, since they’re mostly ancient mummies and reanimated skeletons. It’s also particularly cool that there are so many outdoor and daylight locations. Makes it feel even more like The Mummy to me.

Speaking of the enemies though, they pretty much all look cool. While there’s a lot of fodder to fight your way through, some of the more unique of the baddies have cool looks that differ from an Egyptian theme.

That includes armored revenants of Roman solders, sniper units, giant skittering-scorpions, and more. There’s a ton of detail in Strange Brigade’s graphics across the boards, and it’s one of the things that keeps the team’s adventures fresh and interesting.

Do you like pulp-tinged action? Did you dig Brendan Frasier and Arnold Vasloo’s The Mummy, or are you a one of the legions of Indiana Jones fans out there? If you answered in the affirmative to any of that, you likely have a good chance of enjoying Strange Brigade.

With missions framed in an adventure-magazine style, great looks and controls, and a cool plot and character selection, SB is one ‘lost’ title that is most-definitely a hidden gem.

Strange Brigade might not be a title that you even remember from Rebellion's catalog. But if you missed out on it when it originally released, you definitely will want to have a peek now. The game's Switch port has great looks, excellent gameplay, and bot cool characters and plot. You can play solo or co-op with up to 4 players too, so it just might be the ticket for those looking for some lead-throwing action this summer.

Jason's been knee deep in videogames since he was but a lad. Cutting his teeth on the pixely glory that was the Atari 2600, he's been hack'n'slashing and shoot'em'uping ever since. Mainly an FPS and action guy, Jason enjoys the occasional well crafted title from every genre.
@jason_tas
Previous Trailer: Set out to settle a wild world of monsters and myth in Pagan
Next Trailer: Slinging its way onto the Switch, check out Curved Space