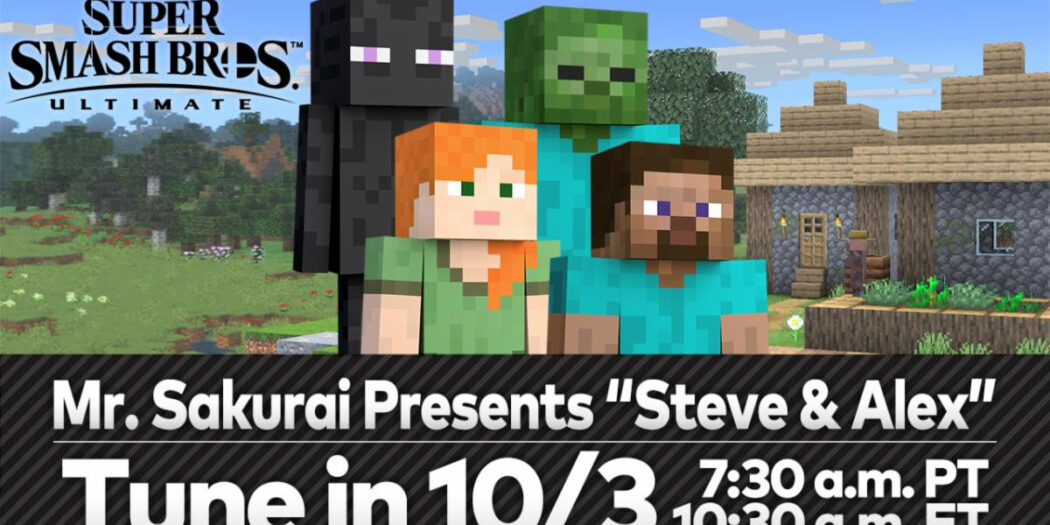 In the realm of things not seen happening, this was probably pretty high up there. Just yesterday, Nintendo announced that Super Smash Bros Ultimate would be getting new characters, and now we know exactly who it’ll be.

Actually two newcomers, the Switch’s fighting game du jour will be welcoming both Steve and Alex from Minecraft to its roster. The characters will be a part of the second Challenger Pack for the game, which will also pack in a new stage and seven music tracks. Of course, those will be of the Minecraft variety.

The official reveal for the new additions will come in the form of a presentation this Friday, the 3rd at 10:30am eastern. There you can expect to see the Smash Bros MC himself Masahiro Sakurai to do the honors.

You’ll be able to watch the show on Nintendo’s YouTube channel, or right in the player below.

Here’s a bit from the official release:

Steve and Alex will be available to players who purchase Super Smash Bros. Ultimate Fighters Pass Vol. 2 or who purchase Challenger Pack 7 separately for a suggested retail price of $5.99. By purchasing Fighters Pass Vol. 2 for a suggested retail price of $29.99, players will get access to Steve and Alex, along with previously released fighter Min Min from ARMS and four more yet-to-be-announced Challenger Packs as they release. Each pack includes one fighter, one stage and multiple music tracks.

Join us in welcoming these blocky new heroes to the Super Smash Bros. Ultimate family!

Jason's been knee deep in videogames since he was but a lad. Cutting his teeth on the pixely glory that was the Atari 2600, he's been hack'n'slashing and shoot'em'uping ever since. Mainly an FPS and action guy, Jason enjoys the occasional well crafted title from every genre.
@jason_tas
Previous October’s Prime Gaming is loaded with plenty of scares
Next Trailer: Space Shuttle VR takes flight today on Oculus