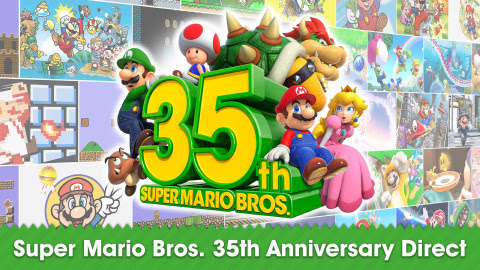 It’s been rumored for a while, but Nintendo today has confirmed that there will be a deluge of Super Mario, including re-releases, coming to Switch.

Hard to believe, but it’s been 35 years since Nintendo’s mascot first donned his now-familiar cap and overalls. Super Mario is an institution in gaming, and as such his 35th birthday is a bit of a momentous occasion.

I have to believe that if Covid wasn’t an issue this year, we would have had a little more hoopla, but nonetheless Nintendo has revealed that there is a ton and a half of Mario on the way. And no, that’s not a fat-joke.

So what’s coming? Well, how about Super Mario 3D All Stars? A collection of Mario’s Nintendo 64 through Wii U era adventures are coming up, that’ll include Super Mario 64, Super Mario Sunshine, and the first Super Mario Galaxy.

Want more? Of course you do, and that’s what Super Mario 3D World + Bowser’s Fury is for. That Switch re-release will contain not only the original 3D World, but also online co-op and presumably some new levels (not yet revealed).

But there’s much more. Nintendo has Mario Kart Live: Home Circuit Game & Watch: Super Mario Bros, and Super Mario Bros 35 all coming up. That last one? It’s a limited time event-game (playable till March) that has 35 players all sending defeated enemies back and forth to each others games.

For more information about all these games, products and events, visit the Super Mario 35th anniversary website.

Jason's been knee deep in videogames since he was but a lad. Cutting his teeth on the pixely glory that was the Atari 2600, he's been hack'n'slashing and shoot'em'uping ever since. Mainly an FPS and action guy, Jason enjoys the occasional well crafted title from every genre.
@jason_tas
Previous Trailer: Grinding Gears Games unveils Path of Exile: Heist
Next Nintendo Download: Pounce and Bounce to Spellbinding Beats