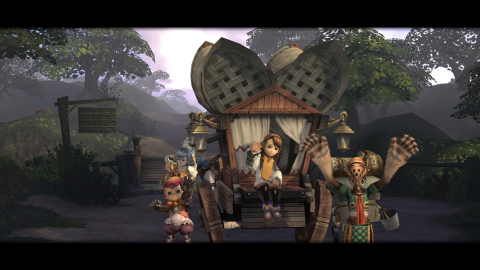 Home / News / Nintendo Download: Gaze Into the Crystal and Discover Your Fate

Nintendo Download: Gaze Into the Crystal and Discover Your Fate

Fresh from yesterday’s Nintendo Direct Mini, this week’s Download sees a few new games land. Those include Final Fantasy, and a title about picking the perfect dog.

Pretty easily the headline game this week, Final Fantasy Crystal Chronicles Remastered Edition is finally here. So if you were looking to finish out your summer vacation (such as it is) with a little long-form gaming, this could be your game.

But if you’re not into Final Fantasy, there’s still a bunch of stuff to occupy you this week. Game releases include Jump Force Deluxe Edition, Immortal Realms, MX vs ATV, Witcheye, moon, and a surprise appearance by none other than Commander Keen. That’s a legitimate shock there.

There’s a bunch more of course, along with a game called Best Friend Forever. What’s that about? Well, it’s a dating sim basically, but one where you also move to a new city and adopt a dog. It’s complicated.

***Additional games, systems and/or accessories may be required for multiplayer mode. Sold separately.

Jason's been knee deep in videogames since he was but a lad. Cutting his teeth on the pixely glory that was the Atari 2600, he's been hack'n'slashing and shoot'em'uping ever since. Mainly an FPS and action guy, Jason enjoys the occasional well crafted title from every genre.
@jason_tas
Previous Trailer: Outbreak shuffles onto PS4
Next Gamescom 2020: LEGO Star Wars: The Skywalker Saga gameplay revealed