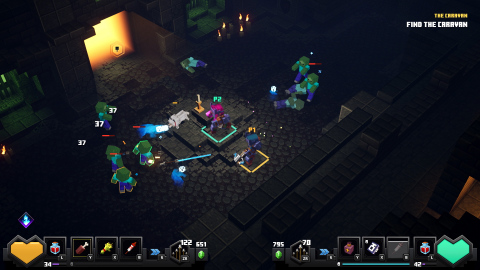 What is this, Valentine’s? No, Nintendo is referring to Minecraft Dungeons with the title of this week’s Nintendo Download. It’s out next week.

Probably not one of the more hotly anticipated games heading to Nintendo’s Switch, yet pretty cool looking really, is Minecraft Dungeons. The crawler diverges from the main Minecraft series in that it’s not about building anything, but adventuring through the dark and scary places in the Minecraft universe.

Not to worry if the aesthetic kills it for you though, as there is more this week. First, the virtual SNES and NES that come with a Nintendo Online subscription both get their latest titles. Those include Wild Guns, Rygar, and more.

Then, Mortal Kombat 11 gets the premium Aftermath expansion pack. That one was detailed here if you’d like to see what’s what with it, and is essentially paid DLC to add onto your copy of the base game.

Past that, there’s of course the usual assortment of smaller releases, most of which I assume you’ve never heard of. Though, I’m pretty sure you’ve heard of one of them at least, since it’s Myst. Well, it’s realMyst, the remastered version of the classic PC title.

All of that and lots more in the full list below.

Jason's been knee deep in videogames since he was but a lad. Cutting his teeth on the pixely glory that was the Atari 2600, he's been hack'n'slashing and shoot'em'uping ever since. Mainly an FPS and action guy, Jason enjoys the occasional well crafted title from every genre.
@jason_tas
Previous King of Fighters 98 gets the Limited Run treatment this week
Next Atari bringing Missile Command Recharged to PC and Switch this month