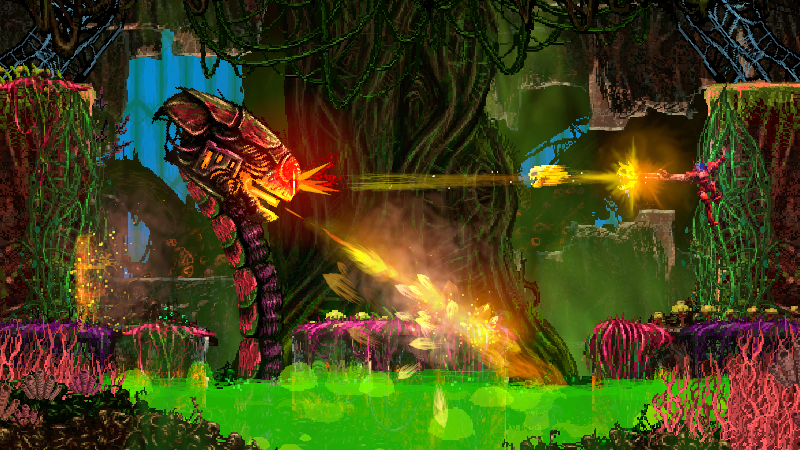 If you missed out on two of the most impressive indie action games of recent years, you’ve got a chance to get both in the Valfaris/Slain pack.

Indie publisher Big Sugar has a whole mess of action prepped for this special double pack of games. Exclusive to the Switch, the bundle includes both Valfaris and Slain: Back from Hell. If you’re unfamiliar with either or both, then you might want to take a look.

From developer Steel Mantis (a two man team), both games are all-action, with Valfaris being of the shooter variety and Slain a hack and slash. They’re also both coated in heavy metal, and play a lot like amped up versions of old school action titles from the the 16bit eras.

The set is available now for the Nintendo Switch (April 23rd in Europe) and Xbox One.

Valfaris: A 2D action-platformer forged from heavy metal. Wield an array of deadly weaponry as you venture into the mysterious fortress of Valfaris. Uncover the truth of its doomed fate and challenge the arcane evil at its very heart. Brutal combat. Deadly enemies. Amazing pixel art. Savage soundtrack. Get ready to rip the galaxy a new wormhole.

Slain: Back from Hell

Slain: Back From Hell: A heavy metal inspired arcade combat game with stunning pixel art visuals, challenging old-school gameplay, and a brutal soundtrack. Fight through a Gothic world and face the deadly overlords that reign over each of its cursed realms. Defeat them to continue your quest, or fail and die gruesomely…

Jason's been knee deep in videogames since he was but a lad. Cutting his teeth on the pixely glory that was the Atari 2600, he's been hack'n'slashing and shoot'em'uping ever since. Mainly an FPS and action guy, Jason enjoys the occasional well crafted title from every genre.
@jason_tas
Previous Itaewon Class (Series) Review
Next New Avatar The Last Airbender figures coming up