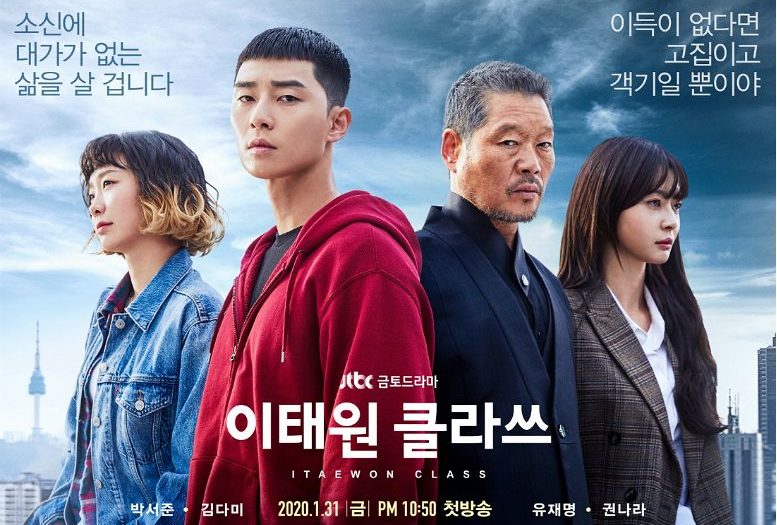 A drama served up with a helping of revenge, South Korean TV’s Itaewon Class follows a young ex-con and bar owner as he strives for success.

South Korea is the mecca for revenge stories with impeccable thrillers of the 2000s and early 2010s such as Old Boy and I Saw The Devil. There’s just something very real, very visceral and very unique about South Korea’s take on one of humanity’s ugliest of responses – vengeance.

While most stories of vengeance follow the ancient injunction of, “before you embark on a journey of revenge, dig two graves.” with the main protagonist losing himself in his unholy quest, Itaewon Class is a masterclass in excellent storytelling, well-written characters and well-produced scenes, though marred by a disappointing second-half.

Itaewon Class is adapted from a webnovel (basically a Korean comic) of the same name with subtle changes in pacing due to storytelling purposes and to make the show flow smoother. While this works out well most of the time, I’d like to discuss what I thought of the series in more detail.

Park Seo-Joon is one of South Korea’s darling lead actor who’s found acclaim in his back to back hits What’s Wrong With Secretary Kim? and Fight For My Way. He’s proven his acting chops by appearing in period pieces, comedies and even as a rich young scion. But never have I seen him in a role which requires the intensity of an older, more versatile actor. Park Seo-Joon portrays Park Sae-ro-yi, the likable and simple-minded protagonist of Itaewon Class.

He is your typical Shounen protagonist – He has a good grasp of right and wrong, is a loving son, will speak out against injustice and is true to his beliefs even to the bitter end. That’s the kind of guy he is and while I find those traits more or less unappealing in other shows and mediums, I find him endearing and even worthy of emulation. It also helps that the character is just so well-written that it almost hurts to see him fail.

I like rooting for the underdogs, and in this case the cast of Itaewon Class are the definite underdogs. That’s easy to see as they try to fight the injustices of society and the realities of life, while trying to make the restaurant prosper.

Hidden beneath the depths of Park Sae-ro-yi’s psyche is a 10-year revenge plan to enact his justice on his oppressors. That includes the wealthy CEO Jang Dae-hee and his stereotypical rich arse of a son, Jang Geun-won who caused a tragedy to befall Sae-ro-yi in the past. I won’t talk about sensitive plot details in this review but I will say this – while they do seem like the typical rich bad guys we’ve seen in every anime or movie, I’ve found myself actually appreciating who they are as a character instead of just the trope that they exemplify.

On the other hand, we have Kwon Nara as Oh Soo-Ah and Kim Da-Mi as Jo Yi-seo, the two main love interests for our hapless protagonist. Soo-Ah has a more than 10-year more than friends, less than lovers history with Sae-ro-yi and Yi-seo is the genius social savvy sociopath who later falls in love with Sae-ro-yi.

I’ve seen more than a dozen love triangles and believe me when I say that I am tired of the cliche ‘will they or won’t they’. That said, the relationships in this series are just so well-written that it actually compliments the story and makes it better.

Moving back just a little to when I was discussing the main villains of the story, often we find ourselves rooting for the downfall of the villains because they are just that – evil. A contrarian point of view to the righteous protagonist’s own beliefs and path. In this case, Itaewon Class is grounded in reality and shows us that people can have their own motives, inhibitions and desires and shows us the process and the lengths to which they will go to get what they want.

Even earlier on in the show, we are shown that if one were to compromise their ideals, look the other way or simply let a bad deed go unnoticed, nothing bad will happen to them. You can simply watch on as someone gets bullied or watch a person get assaulted in the streets, it has nothing to do with you right? Well that isn’t the case for Sae-ro-yi, who claims that he was raised to never compromise on his ideals and that right and wrong must be rewarded or punished accordingly.

It is this simple-minded mindset that gets people to root for him, despite his mediocre intelligence and his simple way of thinking. On the other hand, we have the villains (and other minor characters) who think and feel like real humans. They look out for themselves and their families because that’s how real life works. And yet it is this sharp contrast that provides us a reason to see this show to the end, despite its less than stellar second half.

I’m just really not that satisfied with how the series ended because while the characters are fleshed out, the relationships on the other hand feel a bit forced. I’m not going to name names but the series portrayed the main character as steadfast, does not compromise and will never go back on his word but all of that goes out the window for love, or whatever the hell that was supposed to be. I guess I’m a little salty with how the series ended but it could have easily been better if it didn’t feel so forced.

It’s really difficult to write a review for a series without spoiling anything. But trust me when I say that Itaewon Class is a masterclass in leadership, character writing and camaraderie.

It has a lovable cast of characters, a believable story and a fresh look at revenge and what it can achieve for you if you don’t let it consume you. In fact, Sae-ro-yi might very well be the first protagonist to have made himself a better man all because of his revenge.

Itaewon Class could have been the best TV Show of 2020 and while it falls short of becoming the next big masterpiece in Korean Dramas, it is still an excellent show to binge watch with loved ones.

Benj likes video games, neckties and scotch. His favorite games include Resident Evil 2 and Final Fantasy VIII. You may contact him at [email protected]
@ggburroughs
Previous Grind and brew until it’s done in series 2 of Doom Eternal’s cosmetic series
Next Valfaris and Slain bundled for new double-pack